That Was The Year That Was

This is a brilliant review of the year in what has become an annual treat from the ever-inventive Micawber. I loved it – let us know what you thought.

Please take the time to give your assessment of the puzzle by utilising the star system below.

1a  Parliamentary report tough on tapping by US agents (7)
{HANSARD} – an adjective meaning tough with one of the many US spy agencies inserted (tapping). [Edward Snowden revealed just how much snooping goes on. Britain’s security chiefs appeared before a Select Committee and condemned, not the snooping, but the fact that it had been revealed.]

5a  Inappropriately attributing gender to Bradley? (7)
{MANNING} – the surname of the US soldier who leaked the documents that found their way to Wikileaks. His surname is a bit inappropriate since after his trial he said that he wanted to be a woman – she’s now called Chelsea.

9a  That fellow from London, Russell, gets revolutionary veneer after image makeover (9)
{REBRANDED} – the Cockney form of a male pronoun and the surname of Russell (a sort of comedian) with a revolutionary colour around them. [He changed his image this year to talk about politics and even appeared on Newsnight.]

11a  Brussels hangouts in which la creme may be found? (7)
{ECLAIRS} – the abbreviation for the European Commission (Brussels) followed by places where wild animals hang out. [UKIP and the Tory Party competed to criticise the Eurocrats (a word always preceded by ‘unelected’ in the right-wing press).]

12a  A politician trapped by ‘swivel-eyed type’ mockery (7)
{LAMPOON} – A and the usual politician go inside what local Tory activists were apparently described as by Lord Feldman (co-chair of the party and mate of David Cameron). [Several journalists reported that he called grassroot members swivel-eyed ****s, though he denied it.]

13a  Regret turning over power? I see an evolving attempt to integrate with neighbours (11)
{EUROPEANISE} – reverse (turning) a verb to regret, then add the abbreviations for O(ver) and P(ower) and an anagram (evolving) of I SEE AN. [David Cameron has declared his intention to renegotiate our relationship with the EU and repatriate a number of powers.]

16a  Scotland’s independence party leaders take a wee dram? (3)
{SIP} – leading letters of three words in the clue. [I take this to be a reference to the SNP’s policy of reducing alcohol intake in Scotland, by imposing minimum unit pricing for example.]

20a  Bury a bit of DNA, initially thought to be Richard III? (11)
{PLANTAGENET} – string together a verb to bury, A, a unit of heredity (bit of DNA) and the initial letter of T(hought). [Richard III’s remains were found in a Leicester car park, leading to an unseemly row about where they should be re-interred. A hearse, a hearse, my kingdom for a hearse.]

22a  Blockade Muslim Brotherhood leaders amid outpouring of rage over … (7)
{EMBARGO} – the leading letters of M(uslim) B(rotherhood) go inside an anagram (outpouring) of RAGE and we finish with O(ver). [The leaders of the Muslim Brotherhood in Egypt were arrested and imprisoned after the army coup.]

23a  … toppling of Egypt’s leader Morsi, power seized by one partially qualified? (4-3)
{SEMI-PRO} – an anagram (toppling) of E(gypt) and MORSI with P(ower) inserted (seized). [The elected President Morsi was overthrown by the army led by General Abdul Fattah al-Sisi (never elected by anyone).]

25a  Islamic scholars among rulemakers (5)
{ULEMA} – hidden (among) in the clue.

26a Independent Mandela’s lead role, finally vanquishing odds and rejecting discrimination (9)
{IMPARTIAL} – string together the leading letters of I(ndependent) M(andela), a role on stage or film and the even (vanquishing odds) letters of finally. [Nelson Mandela died.]

27a  BBC boss accepts start of remuneration trend (7)
{PATTERN} – the chairman of the BBC Trust contains the starting letter of R(emuneration). [Following the scandal of very excessive pay-offs to leaving top executives he agreed that changes were needed.]

28a  New Pope took charge, filled with humanity (7)
{PEOPLED} – an anagram (new) of POPE followed by a verb meaning took charge. [A new pope, apparently very down-to-earth and humane, was elected, even though the previous one is still hanging around.]

1d  British detective and US police swapping leads to find source of food adulteration? (9)
{HORSEMEAT} – endeavour to find a fictional TV detective and a slang US word for the police then swap their initial letters. [There was a big scandal when it was discovered that the labelling on a number of meat-based products was not exactly correct.] 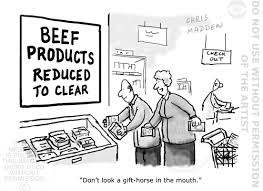 3d  Advanced exam with international sliding scales for calculation? (5)
{ABACI} – A(dvanced), the abbreviation for a European qualification and I(nternational). [Egg-on-face time for hapless Michael Gove, Education Secretary, who announced a new examination of this type for English schools, only to have to change his mind a few weeks later.]

4d Two parties with schemes to start with – but they were never going to fly! (5)
{DODOS} – two festive parties with the start letter of S(chemes). [Presumably a reference to the policies of the two coalition partners.]

5d  Successful athlete turned dame on royal’s final roll of honour? (9)
{MEDALLIST} – reverse (turned) the pairs of letters in DAME so that the second pair precedes the first and add the final letter of (roya)L and a roll or register. [I thought at first that this referred to Tanni Grey-Thompson but she was made a dame a few years ago so I think it must be Dame Sarah Storey, the track cyclist who has won 22 medals in six Paralympic Games.]. Thanks to Gilbert for pointing out my original mistake in thinking that we needed to do a straight reversal on DAME.

6d  In Germany, place unity first – recall left and right, leaving out centre in national government (9)
{NUREMBERG} – the first letter of U(nity) and a verb to recall leaving out the central two letters all go inside N(ational) and G(overnment). [There was an election in Germany – Mrs Merkel won and had to form a coalition with the SDP since the centrist party, the FDP, failed to get the requisite 5% of the vote.]

8d  Greek contraction to have increased (5)
{GROWN} – the abbreviation (contraction) of Greek followed by a verb to have or possess. [The contraction of the Greek economy continued.]

14d  Press trial – writers may be held here (5-4)
{PAPER-CASE} – this is a cryptic definition of where writing implements and materials may be kept. With a space rather than hyphen it’s a reference to the ongoing trial where Rebekah Brooks and other ex-employees at the News of the World are charged with unlawfully intercepting communications.

15d  Turkish area gripped by national rioting (9)
{ANATOLIA} – an all-in-one clue. Insert A(rea) in an anagram (rioting) of NATIONAL. [There were riots throughout Turkey, including this region.]

19d  America determined to embrace Iranian leader, creating relaxed atmosphere (7)
{AMBIENT} – a two-letter abbreviation for America is followed by an adjective meaning determined or intent with the leading letter of I(ranian) inserted. [There was a thawing of relations between the USA and Iran following the election of a new Iranian President.]

21d  Putin revolted by latest couple in homosexual marriage (7)
{NUPTIAL} – an anagram (revolted) of PUTIN is followed by the last two letters of homosexual. [Same sex marriage has now been approved in most parts of the UK, whilst Putin has adopted a more hard-line anti-gay stance in Russia.]

22d  Head of enterprise taking crack ‘fit for task’ (5)
{EQUIP} – the first letter of E(nterprise) is followed by a crack or gag. [In front of a Parliamentary Committee Rev. Paul Flowers claimed he was fit to be chairman of the Co-op Bank but he was caught buying crack cocaine.]

23d  Scotland’s unionist party leaders, going north, finish wee dram? (3,2)
{SUP UP} – the leading letters of the first three words, followed by an adverb meaning on the rise or going north. [This seems to be covering the same ground as 16a, unless you know differently …]

24d  Press baron without honour – Scotsman (5)
{MURDO} – start with the press baron known in Private Eye as the Dirty Digger and take away the abbreviation for the honour awarded for distinguished service in public life. [I think the first four words of the clue sum it up!]

My decision here is not which ones to include in my list of favourites but which ones to leave out, because I like nearly all of them. For starters I’ll pick 5a, 18a, 1d and 6d. How about you?

A Very Happy New Year to Everyone!