I  thought that this was just the right level of difficulty for a midweek Toughie with some excellent attempted misdirections and some very smooth surface readings. I enjoyed it a lot (and it’s a pangram).

Do let us know how you got on and please take the time to rate the puzzle by utilising the star system below.

1a  Bag is kept inside so long (6)
{VALISE} – insert IS into a Latin word meaning farewell.

4a  Pudding’s instant, with nothing rejected in the main (8)
{SEMOLINA} – a short time and the reversal (rejected) of a zero score go inside an old word for the briny. Memories of school dinners come flooding back.

9a  Computer’s latest external device? (6)
{ROUTER} – the last (latest) letter of (compute)R followed by a synonym for external.

10a  In America, one might score with such ladies (4,4)
{MARY JANE} – cryptic definition. Score here is a slang usage meaning to obtain illegal drugs and the answer is a slang term in North America for marijuana. Excellent surface.

12a  Hear me playing on record? It doesn’t last long (8)
{EPHEMERA} – an anagram (playing) of HEAR ME follows an old vinyl format.

13a  Cheery local nosh, starter coming second (6)
{UPBEAT} – a charade of an informal term for a local hostelry and a more formal verb meaning to nosh, but the first letter has to be moved one place to the right (coming second).

15a  Film actor and Welsh colleague scrapping on medieval house (4,9)
{BURT LANCASTER} – the surname of a Welsh actor without (scrapping) the final ON is followed by one of the houses that fought in the Wars of the Roses. 18a  Tightening of belt ordered direct by partner (6,7)
{CREDIT SQUEEZE} – an anagram (ordered) of DIRECT followed by an informal word for a sexual partner (a word that triggers a pangram alert).

22a  Woodworker’s  business for COD? (6)
{CHIPPY} – double definition. This is a slang word for a) a carpenter and b) a fast food shop. I don’t like this much – it’s one thing having false capitalisation of an initial letter, but the whole word??  What do you think?

24a  Successful period, as officer periodically joins bishop in song (5,3)
{FIELD DAY} – the even (periodical) letters of officer followed by the postgraduate degree that a bishop may have inside an old word for a song. I don’t remember ever having seen ‘bishop’ used for this theological degree.

26a  Castle’s storage space, over afternoon, used in party (8)
{BALMORAL} – reverse (over) the acronym for read-only memory (storage space) and insert it, together with A(fternoon), in a formal party with dancing.

27a  One following activity of Wiggins cut two-piece outfit (6)
{BIKINI} – I (one) follows what Sir Bradley does for a living without its last letter (cut).

29a  How lips are when mum’s salty water taken (6)
{SEALED} – a charade of water that’s salty and a past participle meaning taken or guided.

1d  Eddy’s upset about gold medallist’s latest showing? (6)
{VORTEX} – a verb meaning to upset or irritate contains the heraldic tincture of gold and the last letter of (medallis)T.

2d  Cry of disgust given by Jack probing withdrawn airline – it’s ridiculous (9)
{LAUGHABLE} – a cry of disgust and an abbreviation for sailor (Jack) go inside the reversal (withdrawn) of the Israeli national airline.

5d  Guitar picked up marks in test (4)
{EXAM} – ‘picked up’ is not, as I originally thought, a homophone indicator but a reversal indicator in a down clue. So reverse a slang term for a guitar and add the abbreviation for Marks (the old German currency).

7d  The writer’s to pass judgment with cross (5)
{IRATE} – the subjective pronoun used by the writer to identify himself is followed by a verb to pass judgement or grade.

8d  Crack English runner with talent, bypassing training (8)
{APERTURE} – a river in Yorkshire (which is still part of England, however much some of the natives may seek devolution) follows (with) a word meaning talent or skill containing (bypassing) the abbreviation for physical exercise.

14d  Mostly abuse current medication (7)
{INSULIN} – a verb meaning to abuse or malign loses its final letter (mostly) then we have to add an adverb meaning current or fashionable.

16d  Sportspeople utilise this time to study philosopher (9)
{TREADMILL} – string together T(ime), a verb to study (especially at university) and the surname of a nineteenth century English philosopher.

17d  Rocks seen in blue lagoon? (3,5)
{ICE CUBES} – this was my last answer in. Even though the answer was pretty obvious from the checking letters I couldn’t see what it had to do with blue lagoon. Then I had a flash of inspiration and thought it might be a cocktail – Mrs Bradford was sadly deficient in this area of expertise but, as so often, Mr Google stepped into the breach. So, it’s a cryptic definition of what your blue lagoon (a mixture of vodka, blue curaçao and lemonade) should be poured onto. 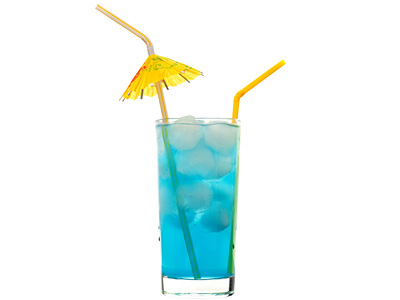 19d  Polish old car before wandering (7)
{IMPROVE} – an old Hillman model followed by a noun that can mean wandering.

20d  Part of ’iking shoe close to bank in position that’s windy? (3-4)
{EEL-LIKE} – the ‘wind’ from the definition rhymes with mind rather than tinned. Part of a hiking (or any other) type of shoe loses its initial H (to match the clue). After that insert the closing letter of (ban)K into a position (that of a golfer’s ball perhaps).

23d  Residence’s drive centrally filled with cement, it’s said (5)
{IGLOO} – the central letter of drive followed by (filled with, in the sense of completed with) what sounds like a verb meaning to cement or stick together.

The clues which I picked out today were 10a, 15a and 27a. How do they match up with what you liked?