Toughie No 1026 by Excalibur

Problems on the Green?

This is unmistakeably an Excalibur puzzle, i.e. it’s pretty quirky. Even for a Tuesday I think it’s a pretty easy Toughie, so I’ll be surprised if the hints are in great demand.

Do let us know how you got on and please rate the puzzle for entertainment by clicking on one of the stars below.

1a  Bad short game — disgusting (3-7)
{OFF-PUTTING} – an adjective meaning bad or rotten is followed by what golfers refer to as their short game, i.e. their play on the green.

9a  To which you go married, coming back single. Right? (4)
{RENO} – semi-all-in-one. This is a city in Nevada once known as the divorce capital of the USA for the speed with which you could get unhitched there. Reverse (coming back) a word for single and R(ight). I do like Zsa Zsa Gabor’s quote: ‘I’m an excellent housekeeper. Every time I get a divorce I keep the house.’

11a  Had list within; left out name of two English kings (6)
{HAROLD} – HAD with a list or register inside but with one L(eft) omitted.

12a  Puts down under ‘Membership fees’ (7)
{SUBDUES} – a charade of a prefix meaning under and membership fees.

15a  Expand passage through mountain (7)
{BROADEN} – a passage or route goes inside a Scottish mountain.

17a  So half beer imbibed is singularly bitter (4)
{ALOE} – ‘singularly bitter’ because this bitter drug is more usually seen in the plural. Half of the word SO goes inside (imbibed) a type of beer. A trademark Excalibur yoda-like clue.

19a  Shows devotion in point to points (5)
{DOTES} – a point or spot is followed by two cardinal points.

21a  Fed up, turned myself in, showing weakness (7)
{DEMERIT} – an adjective meaning fed up or exhausted is reversed (turned) and how the setter would refer to herself goes in it.

22a  When a duet’s played at Haydn Centre (7)
{TUESDAY} – I believe that there is a Haydn Centre in the city of Eisenstadt where he was born but I don’t know if a duet is played there on this day. It’s an anagram (played) of A DUET’S followed by the central letter of (Ha)Y(dn).

24a  Tried to amend early overstatements (6)
{STROVE} – an anagram (to amend) of the early letters of OVERST(atements).

28a  Certainly lost in action (4)
{DEED} – start with an interjection expressing agreement (certainly!) and drop the IN.

29a  Cruel business in which workers realised their worth (5,5)
{SLAVE TRADE} – cryptic definition of the cruel business that some of our ancestors took part in, involving the sale of workers to the highest bidder.

2d  Board with party of climbers (4)
{FOOD} – a charade of a festive party and OF, all reversed (climbers).

3d  Stoned, made a match (6)
{PITTED} – double definition, the second meaning matched two individuals or teams against each other in a contest.

4d  Every term that comes round is interminable for one (7)
{TEACHER} – I am sure that some of these must enjoy their work but this particular one apparently doesn’t. A synonym for every has TER(m) without its terminating letter put around it.

6d  Understands, putting arms round the female (7)
{GATHERS} – an informal (mainly US) word for handguns (but actually the abbreviation for types of machinegun) contains a feminine pronoun.

7d  Applause for encore? It’s old (6-4)
{SECOND-HAND} – double definition, the first a cryptic description of what a performer doing an encore may get at the end.

8d  ‘How astonishing,’ one thinks (3,4,3)
{YOU DON’T SAY} – a reply expressing astonishment could also indicate that one is thinking something but not putting it into words.

13d  It shows what stage you’ve got to in your romance (10)
{BOOKMARKER} – cryptic definition – it could go in a romance or in any other literary genre. This word is more often seen without the last two letters. 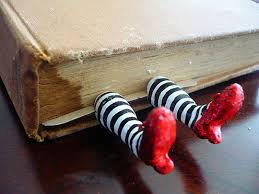 14d  In recollection to erstwhile students, you put your foot in it (5)
{SABOT} – reverse (in recollection) TO (from the clue) and one-time university students who have successfully graduated.

15d  Said to cover up and get head protection (5)
{BERET} – this sounds like a verb to cover up or hide underground. Does it? Not to me.

19d  Orders harsh cuts unionist rejected (7)
{DIRECTS} – an adjective meaning harsh or grave is followed by C(u)TS from which the abbreviation for unionist has been expelled.

20d  Incident in the east — mistakenly is sure to insert ‘north’ (7)
{SUNRISE} – an anagram (mistakenly) of IS SURE gets N(orth) inserted.

23d  Poster: last in first half of series (6)
{SENDER} – a synonym for last or conclusion  goes inside the first three letters of series.

25d  Motorists taking in eastern state air (4)
{ARIA} – conventionally in crosswords motoring organisations are known as ‘drivers’ or ‘motorists’. Insert the standard abbreviation for a small state in the eastern USA.

The clues I liked best were 9a and 29a. How about you?