Toughie No 982 by Excalibur

Something to get your teeth into?

Good afternoon from South Staffs, although by the time this is published I expect to be well towards a stop-off in Kent, en route to France.

This being my first go at blogging a Toughie, I’m short of reference points for the difficulty – I don’t usually look at how long a Toughie takes me.  But on the basis that this one took about twice the time I would take for a ** back pager, I think ** is reasonable.

5a           Spiel from salesman — one being nice to your dog? (6)
{ PATTER } Double definition, the second being how you might describe a person carrying out the usual way of being friendly to a dog.

8a           Carried off hurt, I’ve unfortunately to be admitted (8)
{ ACHIEVED } Take the past tense of a verb meaning to hurt persistently, and insert an anagram (unfortunately) of I’VE. Carried off here is in the sense of ‘succeeded’.

10a         Queen/king alternative that’s flawed (5)
{ ERROR } The regnal cipher of Her Majesty, then the initial of the Latin word for king or queen, and finally a conjunction expressing an alternative.

11a         For crying out loud, you should use it! (9)
{ MEGAPHONE } Cryptic definition of something you might use to address a crowd outdoors. 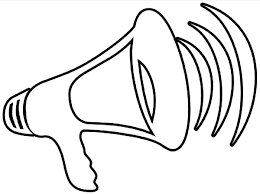 20a         Going by book, sheep-like, dull and stolid (6)
{ BOVINE } An abbreviation for Book followed by a word meaning sheep-like, producing a word which is rather more ox-like. 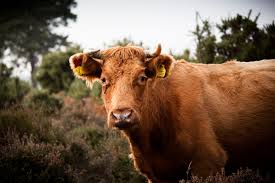 23a         Landing strip from which there are no take-offs (8)
{ FLYPAPER } Cryptic definition of a sticky strip to catch flying insects.

26a         Quickly adopt an attitude that’s flexible, to be accepted (9)
{ POSTHASTE } A verb meaning ‘adopt an attitude – like an artist’s model – with an anagram (flexible) of THAT’S inside it.

3d           Before being overwhelmed by temper, come to your senses (3,6)
{ SEE REASON } A poetic word for before inside a verb meaning to temper or mature.

5d           Spoils parts of book with bad padding (8)
{ PILLAGES } The definition refers to the act of spoliation. The leaves of a book with a synonym of bad inside.

6d           One loses the first set early on, and later struggles to retain the second (5)
{ TEETH } A cryptic definition of a part of the body we all have two sets of in our lifetime. I felt there ought to be a wordplay in there somewhere, but I can’t see it.

12d         Unit and three-quarters therefore (3)
{ ERG } Remove the final O from a four-letter Latin word for therefore to get a CGS unit of work.

15d         The more washing up there is, the bigger it’s been (9)
{ SHIPWRECK } … because we’re talking about what’s washed ashore after a maritime disaster. 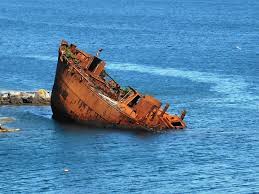 21d         Silly little daughter left behind (3)
{ AFT } Remove an abbreviation for Daughter from a word meaning silly to get a nautical term for behind.


24d         Takes in student, is rewarded financially (6)
{ LEARNS } The letter found on a plate denoting a student driver, followed by a verb for being financially rewarded for work.

27d         Saying to ourselves: ‘This is a very long river’ (5)
{ TAGUS } The longest river on the Iberian peninsula.  A saying or quotation followed by the pronoun relating to ourselves.

All being well, I’ll be back on the Cryptic next week, and blogging from somewhere in Burgundy.