A Puzzle by Hieroglyph

Many thanks to Hieroglyph for an entertaining puzzle exploring some of the by-ways of the gutter press.  As Gazza has already mentioned, there are some straightforward clues to get you going along with a few that will have you scrathing your head for a while whilst you work out the wordplay.

11 Foster‘s sign covered by newspaper (6)
{FOMENT} – … as in encourage or promote.  A word for a sign or portent goes inside the abbreviation of a daily newspaper.

12 Brings up U-turns about including the Queen in The Mirror (8)
{NURTURES} – An anagram (about) of U-TURNS with the inclusion of the Queen (ER) reversed (in the mirror).

13 Source of excitement? An Ireland scrum (9)
{ADRENALIN} – … the hormone that produces a rush of excitement.  An anagram (scrum) of AN IRELAND.

16 Finally departed? Epitaph for a weakling (4)
{DRIP} – The last letter (finally) of departed followed by the abbreviated form of an epitaph seen on gravestones.

17 Offensive city bar is devoted to luxury (9)
{SYBARITIC} – An anagram (offensive) of CITY BAR IS.

21 Drink is hot and fatty (8)
{STOUTISH} – A type of beer such as Guinness followed by the IS from the clue and the abbreviation for hot.

22 Not pretty, note: tweeted @Hieroglyph against electronic case (6)
{DATIVE} – … in the sense of grammar.  Remove (not) words meaning pretty and a musical note from the word TWEETED.  Follow this with how you would say @, a pronoun for the setter (Hieroglyph), the abbreviation for against or versus and the abbreviation for electronic.

26 Most rational, building nests around oak’s centre (6)
{SANEST} – An anagram (building) of NESTS around the middle letter (centre) of OAK.

2 Oddly, sow seed over earth for vegetable (5)
{SWEDE} – The odd letters of SOW SEED go over the abbreviation for Earth.

3 Complex character – Hannibal, energy to the fore, advanced (7)
{ELECTRA} – … a complex character in Greek mythology.  The surname of Hannibal (of Silence of the Lambs) has the E (energy) move to the top.  This is followed by the abbreviation for advanced.

5 Secondly, solve crossword without including fellow’s city (6)
{OXFORD} – The second letter of solve is followed by XWORD (cross-word) with the W removed (WITH-OUT) around the abbreviation for fellow.

6 Cut it fine when boiling pasta (9)
{FETTUCINI} – An anagram (when boiling) of CUT IT FINE.

7 Cuts of lamb, say, showing up in pies (7)
{TARGETS} – … another word for the neck and breast of lamb.  Reverse (showing up) the abbreviation for say inside (in) a word for pies.

14 17’s GR8 you’re texting – he’s half American, note (9)
{EPICUREAN} – … another word for 17a.  Another word for great (GR8 in text speak) is followed by how you would text you’re, half of the word HE, and the abbreviations for American and Note.

20 Event in which American gets the record? (6)
{DISCUS} – … an athletic event.  Another word for a record is followed by an abbreviation for American. 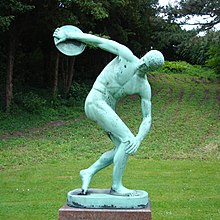 23 Drunk, mean and irritable if up first (5)
{TIGHT} – A triple definition, the last being UP***** meaning irritable.