Toughie No 791 by Petitjean

This competent but uninspiring puzzle starts off the Toughie week. No favourites – I found it a bit of a steady slog. 10a    Femme fatale wanting piano refrain (6)
{MANTRA} – drop (wanting) the final P(iano) from a femme fatale, delightfully defined by Chambers as “a woman who takes a mischievous pleasure in attracting and acquiring men”, to get this refrain or incantation 24a    ‘Like a lark maybe?’ Ma gulped in shock! (8)
{PLUMAGED} – this adjective meaning with feathers, like a lark or any other bird, is an anagram (in shock) of MA GULPED

2d    Absent-minded detective’s quirk (8)
{DISTRAIT} – I didn’t know this adjective meaning absent-minded but it was easily derived from a two-letter abbreviation for a detective, the S from ‘S and a quirk

4d    Peter Pan fantasist out with retro artist for French fare (4)
{BRIE} – start with the surname of the author of Peter Pan, reverse (retro) and then drop (out with) the usual artist to get this French fare 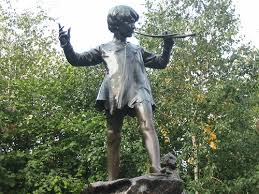 5d    Seat tipped over getting a new arm (6)
{WEAPON} – reverse (tipped ) a three-letter seat, add O(ver) and then insert (getting) A and add N(ew) to get this arm, a spear or gun perhaps

9d    Vamp hits the bottle — when up! — about ten (6)
{SEXPOT} – this vamp is derived by reversing (when up) a verb meaning hits the bottle around the Roman numeral for ten

13d    Overturn goal after leading (5)
{UPEND} – a verb meaning to overturn is created by putting a goal or aim after a word meaning leading, as in leading 1-0

Rather too many clues involving bits of words being put together for my liking.