A reshuffle of the Blogging Brigade means that you get me today, tackling what BD warned me as being a bit tricky. The bark wasn’t perhaps quite as bad as the bite, and I  found it to be a fair and challenging puzzle, with a couple of clues that lifted it just above 3* difficulty. It wouldn’t have been totally out of place on the Toughie page, but regular solvers should not be put off by that.

8a           Sign in west obscured by sun (7)
{WITNESS} We start with an anagram (obscured) of IN WEST, followed by S(un) meaning to verify a document’s authenticity.

10a         Explorer with outfit imbibing drink in front of hotel (7)
{RALEIGH} This British explorer cropped up a few weeks ago (DT 26775). Take a synonym for outfit and insert (imbibe) a word for beer, then add H(otel)

11a         Decrease vote for military award (4,5)
{IRON CROSS} Nice wordplay, where decrease is what one does on a board, followed by the mark made on a voting form. The result is one of Germany’s highest military awards. 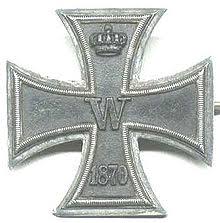 12a         Shot along in Grand Prix from the back producing damage to car (5)
{PRANG} Shot along translates to “moved at pace”, within PG (Grand Prix reversed) – this term for a collision results. Possibly as a result of applying 17d?

13a         Trouble close to raging fire out of control (5)
{GRIEF} The final letter (close) of raginG and an anagram (out of control) of FIRE produces trouble, or anguish

17a         Value considerably parking facility around Harrods, say (3,5,5,2)
{LAY GREAT STORE BY} Take a description (5,5) of Harrods (or Printemps) and insert this into where you pull off the road for a rest, to derive this expression for having great regard for something. (Comments below suggest that this phrase is more commonly seen with SET as the first word)

19a         Baseball player’s means to carry liquid (7)
{PITCHER} A double definition of the “bowler” in the US game that I could never fully appreciate (just not cricket, you know!) and a vessel used to carry water, wine etc.


21a         Man say getting offer to include exercise (5)
{BIPED} A definition of man’s (or woman’s) standing on two feet is derived from an offer made at an auction outside (including) the standard abbreviation for exercise.

24a         Suit maybe beginning to tangle beside bottom (5)
{TRUMP} The card suit selected to outweigh all others in, say, a hand of bridge, is formed from T(angle) and a word for rear-end.

26a         Welsh place left secure beside rough mound miles away (9)
{LLANDUDNO} This Welsh town is perhaps better known than a fairly recent example, and is constructed from L(eft); to secure, as in a fish; and an anagram (rough) of mOUND (Miles away)

27a         Salvation Army blocks unrefined moral campaign (7)
{CRUSADE} Insert the abbreviation for the “Sally Army” inside a term for unrefined (oil, for example)

28a         Travel regularly with second tiny building let out (7)
{SHUTTLE} This mode of frequent transport (London to Edinburgh flights / Eurotunnel / Space) is constructed from S(econd); a small wooden building; and an anagram (out) of LET

1d           A section of a party around North getting coverage? (6)
{AWNING} A (from the clue) and the typically Right, or Left, faction of a political party, with N inserted, produces something to keep the sun off your patio. (Not needed in this part of West Sussex this morning!)

2d           Communist almost invading a business district, a terrible act (8)
{ATROCITY} Take A, and a term for the business district (of London, for example) and insert a term for a communist, missing the final letter. The sort of thing sadly going on in Syria at present.

3d           Other chef cooking around back of kitchen from now (10)
{HENCEFORTH} An anagram (cooking) of OTHER CHEF around the back of kitcheN derives an adverb pointing towards the future. One hears the term “going forward” nowadays – not keen on it myself.

4d           Speed is hazard traversing black loch (9)
{BRISKNESS} The definition is speed. Take B(lack) and the (most?) famous Scottish loch, and insert a noun meaning hazard

5d           Trim container for ammunition (4)
{CLIP} Double definition of a verb, followed by something used to store bullets

6d           Agents detaining dishonourable fellow, chirpy type (6)
{CICADA} This one just about merits The Order of the Chestnut – The US Intelligence (oxy-moron?) Agency, with a “rotter” inside (detaining) produces this chirpy type of cricket

15d         Outing to take in endlessly dissolute chap and awful singer (10)
{TROUBADOUR} It took me a while to work out the required definition from the rest of the fodder. We are looking for a singer, or poet, from the Middle Ages. A word (4) for trip; insert (take in) a French term for a rogue, missing the final letter, and a synonym (3) for awful. 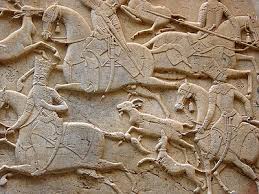 17d         Foolish person left for daughter cosmetic accessory (8)
{LIPSTICK} Substitute D(aughter) for L(eft) in a term for a foolish person (as in Rodney / “Fools & Horses”) to derive what is often applied in the reversing mirror on the way to work. Amusing, but I think we might have seen a similar clue recently?

18d         Hasten start of punt in river before change in tide (8)
{EXPEDITE} A river in Devon, with P(unt) inserted followed by an anagram (change in) TIDE means to hurry up

20d         Greek character restricted trick in house (6)
{TAURUS} The 19th letter of the Greek alphabet, and a synonym for trick with the final letter missing, together build this House of the Bull. Click here for an explanation of the houses of the horoscope.

23d         Some top assists, common feature of a football game (4)
{PASS} Hidden (some) in two of the words in the clue is a verb, or noun, that features in all forms of this sport

The mist outside my office hasn’t lifted yet, but this workout has cleared the fog that was in my brain. I suppose that 15d made me work the hardest, so probably my CotD – but what do you think?