After a week of celebration in Crosswordland, normal service is resumed with today’s challenge from “our” brand-new octogenarian. Rufus provides us with another gentle and enjoyable start to the week – his consistency never fails to impress.

1a           Redeeming feature of a loan, perhaps (4,6)
{PAWN TICKET} The receipt that one would obtain when exchanging some valuables for cash. 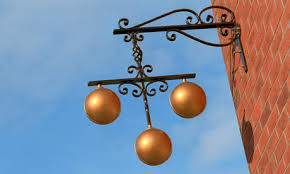 9a           Information given by grass, say? (4)
{DOPE} A double definition of terms used to describe both “inside” information and a recreational drug.

10a         Mysterious form of harvest rotation? (4,6)
{CROP CIRCLE} Features created by aliens (?) that appear overnight in the countryside. 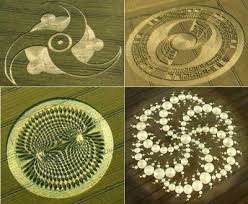 12a         A match for the devil (7)
{LUCIFER} A double definition of something you strike, and another name for Satan. (also the planet Venus, when appearing as the morning star)

15a         Aspired to become a literary giant (7)
{DESPAIR} Be warned – this clue may cause a little consternation amongst some of our solvers! It’s an anagram (to become) of ASPIRED, and results in the giant in The Pilgrim’s Progress by John Bunyan!

16a         Consequently we had scattered (5)
{SOWED} We are looking for a synonym for scattered (not an anagram of WE HAD is I initially thought). A word for consequently, followed by an abbreviation of my misplaced anagram fodder.

17a         Sponges theatre-managers like on their seats (4)
{BUMS} In theatre-land it’s all about putting these on seats, and also a slang term for those asking for your loose change.

18a         A most unfair description (4)
{UGLY} A gently cryptic definition of something / one not blessed with good looks.

22a         Novel, article and story (7)
{RECITAL} Novel indicates an anagram of ARTICLE, and results in a synonym for a story.

24a         Spinner quietly stands by the French pitch (6)
{TOPPLE} A word for a spinning toy, P (quietly) and the masculine French definite article produce a word meaning to plunge forward, or over-balance.

27a         Wealth is about to provide security for a girl in nursery story (10)
{GOLDILOCKS} Start with a precious metal, then wrap IS (about) something used to prevent unwanted entry, and derive a girl who got involved with a trio of ursine creatures.

3d           One living in high mountains, alpine perhaps? (6)
{NEPALI} An anagram (perhaps) of alpine produces an inhabitant of a sovereign state in South Asia.

4d           They’re frozen in suspense (7)
{ICICLES} Cryptic definition of what hang down from guttering in winter.

7d           Proceed directly to lead an honest life? (2,8)
{GO STRAIGHT} In Monopoly this instruction sends you directly to Jail. And when you come out, you are said to do this.

8d           Mint copper sovereign (10)
{PENNYROYAL} This plant of the mint family is built from the basic unit of our currency, and an adjective describing a Sovereign.

12d         Due to disruption, giving boy art oral in the science room (10)
{LABORATORY} The anagram indicator (initial part of the clue) is also a nice piece of wordplay. BOY ART ORAL produces  a room full of Bunsen burners and test tubes.

13d         Happen to reach gap in hills (4,2,4)
{COME TO PASS} A phrase describing the occurrence of an event (often used in the Bible) is also how one might define arriving at an upland road.

15d         Put off Edward’s rise with hesitation (5)
{DETER} The definition is to put off, and is derived from reversing (rise) an abbreviation for Edward, followed by the usual small hesitation.

19d         Criminal is laid up, having broken a leg (7)
{ILLEGAL} A verb meaning criminal, or unlawful, is a word for poorly, followed by an anagram (broken) of A LEG

20d         Note given to the ill will get a rest (7)
{RESPITE} A word meaning care for the ill is also a term for as rest, or reprieve. (see Comments 6 & 7 below – I think that Jezza et al are correct, and my thanks for the alternative definition. To avoid confusion, I’ll leave mine on view)

26d         Large bird raising smaller ones (4)
(SKUA} A bit of a chestnut to finish with – this large seabird is a reversal (raising) of penguin-like varieties. A couple of clues took a bit of solving, which lifts this into 3* territory for me. But, what do you think?