Hola from the Vega Baja.  Another enjoyable offering from Jay which raised a few smiles and had a few d’oh moments as well. If I’ve counted right there are 4 anagrams and 2 partial anagrams so that should keep some of you happy! Also the usual quota of ‘take the first and/or last letter’ type of clue.
Unfortunately limited opportunities for pictures of scantily clad ladies!

9a           Big guns getting sick boarding vessel (9)
{ARTILLERY} –These big guns are formed by placing a word for sick or unwell inside (boarding) a vessel, not a boat or container but a blood vessel.

11a         The type of deposit made by sailors? (6)
{TARTAR} – A type of deposit found on your teeth is made from one of the usual sailors twice. I quite like the surface of this one. Had me thinking JETSAM for a while.

13a         Soldiers with wind flinch (6)
{RECOIL} –Take some of the usual soldiers and follow with a word meaning wind, as in wind up a piece of rope, and you get a word for flinch or shy away from. This one raised a bit of a smile, but then I do have a rather schoolboy sense of humour!

18a         List of court cases is clear and ordered (8)
{CALENDAR} – This list of court cases is an anagram (ordered) of CLEAR AND.  Checked this in the new BRB and one of the definitions is a list of prisoners awaiting trial. Well, now I’ve got it I may as well use it!

19a         A beast is barking, but calms down (6)
{ABATES} – This word meaning calms down is an anagram (barking?) of A BEAST. Never come across this anagram indicator before but I suppose it works – barking mad. As a friend of mine used to say – “He’s a small town in Essex – Barking!”.

21a         Step in front of empty net or grating (8)
{STRIDENT} – Take another word for a step or large pace and follow with NT (empty N(e)T) to get a word for grating in the sense of a sort of voice which may grate on you.

23a         Aquatic bird mostly found by South Africa’s capital (6)
{ZAGREB} – An aquatic bird without its final E (mostly) placed after (found by) the IVR code for South Africa gives the capital of Croatia. This abbreviation is also South Africa’s internet top level domain. 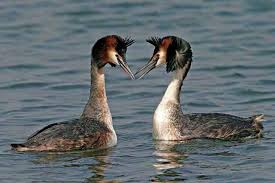 26a         Cooperative’s revealing performance? (5)
{OPERA} – A musical stage production is hidden in coOPERAtive.

27a         Banned oilman’s craft? (9)
{OUTRIGGER} – A type of boat used in the Pacific islands is a charade of a word for banned (3) followed by a guy who works on a drilling platform (6).  Not sure about this clue. 1. The answer is a part of a boat, not the whole thing. 2. I think the first part meaning ‘banned’ is a bit thin. 3. Although I didn’t think twice about the second word meaning an oilman that definition isn’t in the BRB or any of the on-line dictionaries I use. Apart from that it’s fine! Discuss!

28a         What might mean the end for telepathy and modelling? (5,7)
{DEATH PENALTY} – This would certainly be your end if you suffered it! It’s an anagram (modelling) of TELEPATHY AND.  Took me a while to spot that this is an anagram – well concealed IMHO. I spent quite some time trying to do something with ESP and SITTING etc before the penny dropped, d’oh!

1d           Pot factory on the outskirts of Exeter (7)
{PLANTER} – A type of pot in which you might grow flowers. Take another word for factory and follow with ER (outskirts of E(xete)R). 2d           Lessor initially lost log (5)
{ENTER} – Take someone who leases something and remove the first letter (initially lost) and you’re left with a word for log, as in put something in a record.  One of those tricky to hint without using the answer itself!

3d           Redesigned Oval isn’t a cure for all that’s bad (9)
{SALVATION} – An anagram (redesigned) of OVAL ISNT A is a word for a cure for everything or anything.  This isn’t an allusion to our current cricket team by any chance?

5d           Fitting end of affair in bonding with heartless organisation (6,2)
{TRYING ON} –This fitting is what you might be doing at your dressmaker or tailor. Take another word for bonding or joining and insert R (end of affaiR) and then follow with ON (heartless O(rganisatio)N).

6d           A reminder that George is inside, naked (5)
{NUDGE} – Ignore the comma in this clue and just do what it tells you. Insert G(eorge) into another word for naked and you’ll get a reminder or push in the right direction.

7d           Patient workers with time frame for window (8)
{CASEMENT} – The well disguised definition here is ‘frame for window’ and it’s a charade of a hospital patient, some workers and T(ime).

8d           Miserable effort by friend (6)
{PALTRY} – This word meaning miserable in the sense of not much is a friend followed by an effort or attempt.  Is it just me or is this clue the wrong way round?

14d         Amounts of energy required for fixing oil scare (8)
{CALORIES} – These amounts of energy are what you have to cut down on if you’re on a diet. They are an anagram (fixing) of OIL SCARE.

16d         A bookkeeper’s sign preceding revolutionary Iran (9)
{LIBRARIAN} – This bookkeeper isn’t an accountant but literally someone who looks after books. Take one of the signs of the Zodiac (mine as it happens) and follow with an anagram (revolutionary) of IRAN.

17d         Waterproof paint? (8)
{RAINCOAT} –This is a waterproof garment. If split (4,4) it would be a phrase which could just about describe a layer of paint intended to repel water.

20d         Without having had a drink, bore becomes involved in cunning (7)
{SOBERLY} – This is an adverb describing how you would act if you hadn’t had an alcoholic drink. It’s an anagram (becomes involved) of BORE placed in another word for cunning.

22d         Hanging Dr Parrot (5)
{DRAPE} – This hanging or curtain perhaps is DR (from the clue) followed by a common crosswordland word for parrot, in the sense of copy.  Poor Dr Parrot!

25d         Second best finish (4)
{STOP} – Take S(econd) and follow with a word for best to get a word meaning finish or cease. Another good surface, simple but elegant.

Lots of good clues today but my favourites are 13a and 6d. How about you?