Greetings from New York City, where your reporter has now learned four new words, thanks to today’s offering from Elgar.

10a    War-reporter attending University later! (5)
(ADIEU) A war reporter named Kate plus the abbreviation for university equals a word of farewell.

12a    Demonstration, maybe by students, not against examination (7)
(PROTEST) If you’re not con-exam, you might see a student demonstration.

14a    It does easily secure shop’s ultimate requirement (7)
(DEPOSIT) The last letter of “shop” is included in a loose (easy) arrangement of IT DOES for the cryptically defined requirement.

17a    Compound 11 introduced into old valve (7)
(DIOXIDE) Nothing to do with the answer to another clue, a chemical compound puts a Roman numeral within a device more commonly thought of as an electron tube. 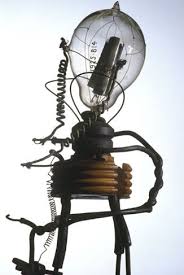 19a    All well, presumably? Answer on Cameron’s back burner (3-4)
(OIL-LAMP) If all is well, then there’s nothing bad, right? That, plus abbreviations for “answer” and a reversal of Cameron’s title show an incandescent device. [I’m not sure why the enumeration shows a hyphen – it’s not that way in any of the dictionaries that I checked. BD]

22a    Cack-handed group asking God to assist cast? (7)
(PLAYERS) A word for people seeking divine guidance changes its handedness in the second position for a theatrical cast. 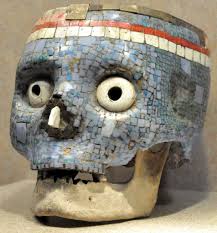 29d    Trainspotter’s food and drink devoured after one (9)
(ANORAKISH) After A, put a Turkish spirit within a little snack for an adjective of what a trainspotter is.

1d    For Americans, the essential On the Origin of Species (cheers ’em up, with kicks) (4,3,8)
(MEAT AND POTATOES) A U.S. phrase describing basic things can be built from a word for “on,” some genetic code (Origin of Species), a salutation (cheers) and EM all reversed, followed by another word for “kicks.”

2d    Georgia’s an easy catch (5)
(GAPER) The postal code for Georgia has a word for “an” to get a bit of cricket slang.

3d    I caught summer in Bordeaux when joining parts of refresher course (3,4)
(ICE TEAS) In order (joining parts), letters for I and “caught,” the French word for summer and a synonym for “when” become a (food) course that many find refreshing.

4d    Ready to supply the limit of human memory? (4,3)
(YEAR DOT) Nothing to do with preparedness or money. Just treat the first two words with suppleness for a phrase suggesting the beginning of time.

5d    Reconditioning for poet and writer’s block (7)
(NOTEPAD) Another well-hidden anagram, this one taking POET AND for a writer’s “block.”

6d & 26a    A musician, I can go up to perform a turn with comic, foremost of impressionists (7,7)
(GIACOMO PUCCINI) Someone who, admittedly, did play the organ, but is far better known as a composer, can be identified by mixing the letters (to perform a turn) of I CAN GO UP COMIC and the first letter of Impressionists.

7d    Some cat hemming in one resolving subtle differences (1,4,4)
(A FINE LINE) Place IN inside “some” + “cat” to get a phrase for what’s between two similar things.

8d    During appearances jazz quartet’s demeanour finally a sort of possession (9,6)
(SQUATTER’S RIGHTS) The letters of QUARTETS get jazzed, together with the final letter of demeanouR, inside a word for “appearances” for a legal term of residency.

15d    Pander to all in storm when entering current light shower (5,4)
(PILOT LAMP) A word for “pander” surrounds the storm-tossed letters of TO ALL for another incandescent device.

18d    The goon told us that he was the Italian lecturer (3)
(ILL) A reference to a misleadingly lower-cased Goon’s epitaph is the Italian word for “the” and an abbreviation for lecturer. [Apparently the inscription had to be written in Gaelic in order for it to be approved by the Chichester Diocese. BD]

22d    Stocking up on 50% each? Mr Logic’s turning his head (7)
(POPSOCK) A stocking is built from only one letter from each of UP and ON, and a “Star Trek” character’s name with the first two letters swapped. 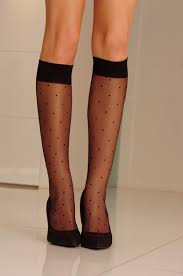 Many thanks to Jon for giving up his Thursday evening (New York time) to produce this review. I really thought I might need to give him a nudge with 18 down, but he ferreted it out himself.  BD