Hola from the Vega Baja, where Autumn has set in – jeans, socks and rugby shirt required today!

A super puzzle today from the Wednesday Wizard with some fantastic clues. I thought it a bit trickier than his recent offerings but very entertaining and I nearly gave it 5* for enjoyment, but that might be just due to my mood at the moment. A few ‘D’ohs’ and a few bangs of the head on the table as the pennies dropped but that may be due to having visitors and therefore more than the usual excessive alcohol intake!

1a    Bags left in bags (6)
{SLACKS} – Of course, the definition is ‘Bags’, as in casual trousers. Take a word for bags in the sense of what coal might come in and insert L(eft).   I like this clue a lot!

5a    What are worn at work, generally before start of strike? (8)
{OVERALLS} – A garment a workman might wear is made from a word meaning generally or ‘on the whole’ followed by S (start of Strike)

9a    Looking for a design, in a way (5,1,7)
{AFTER A FASHION} – The definition is ‘in a way’ or ‘sort of’. Take a word meaning looking for, searching or chasing and follow with A (from the clue) and a word meaning design or mould. This clue is not easy to hint so if anyone can improve on my attempt I’ll be very grateful! Have to say it’s one of my favourites though.

10a    The girl who’s left gold in the keeping of criminal buyer? (8)
{FLORENCE} –  Start with L(eft) and heraldic gold and place them inside (in the keeping of) a guy who buys stolen property to get a woman’s name (the girl). This was my Grandmother’s name and pommette and I named our boat after her  – look me up under the bloggers tab to get the boat name (it’s the Italian version of this girl’s name). 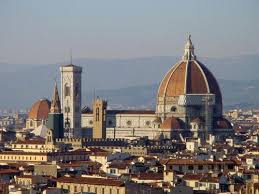 11a    Head of crime family needs essential drug-runner (6)
{DONKEY} – Take the title of the head of a crime family – think Mr Corleone in The Godfather – and follow with a word for essential and you’ll get a colloquial term for someone who carries drugs, not a ‘mule’ but similar!

14a    Carrier carrying item of underwear — it’s a farce! (8)
{TRAVESTY} –The carrier your butler may use to bring you your afternoon tea has inserted (carrying) an item of underwear to give a word meaning a farce.

16a    Sort sure to crash in lower gear (8)
{TROUSERS} – Gear as in garment! Something you wear on your lower body is an anagram (to crash) of SORT SURE.

19a    Reveal rent for retail store (6)
{OUTLET} – To reveal or make public followed by to rent, as in lease, gives a retail store.

21a    Supports people in case of bias (6)
{BRACES} – These supports, for your trousers perhaps, are a word for a people inserted in BS (case of BiaS).

23a    Running a temperature, shows sign of exhaustion wearing these (3,5)
{HOT PANTS} – If you were running a temperature you would be this (3), followed by what you might do if you were exhausted or out of breath, gives a type of woman’s clothing from the 70’s – which certainly raised my temperature! I just hope I’ve come up to Gazza’s pictuure standards here! 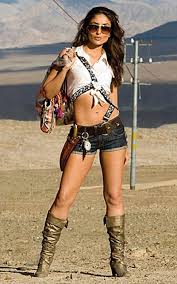 25a    Blair? I’d bet all worried about game played here (8,5)
{BILLIARD TABLE} – A place where a game like snooker is played is an anagram (worried) of BLAIR ID BET ALL.

2d    The French left a confused flier (7)
{LEAFLET} – Take the usual French definite article and follow with an anagram (confused) of A LEFT and you get a flier or brochure.

5d   What copper may be when out of uniform? (7)
{OFFBEAT} – Cryptic definition of what a policeman (copper) might be when not working his usual round.

13d    Genial Navy bunch — full bars with no outsiders (9)
{AVUNCULAR} –  Definition is ‘genial’. Take each of the next  4 words of the clue and remove the first and last letters. (with no outsiders ). String what’s left together and you get the answer!  My favourite this week – brilliant!

15d   A job with a group on the rise for these renegades (9)
{APOSTATES} – These are people who’ve given up a religion – renegades. Take A (from the clue), a job or position. A (from the clue again) and a group reversed (‘on the rise’ in a down clue). Tricky little rascal!

17d    Dish that’s unusual and something of a bore (7)
{RAREBIT} – A word for unusual, or not common, followed by the business end of your electric drill gives some food a bit like cheese on toast and often associated with Wales.  I’ll not mention the ‘virgins in Cardiff’ bit! 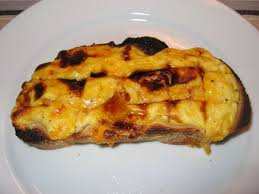 18d    Areas where head of state is apprehensive, reportedly (7)
{SPHERES} – Areas of influence or expertise are made from S (head of State) followed by some letters, which aren’t a real word but if pronounced, would be a homophone (reportedly) of  fears (be apprehensive).

20d    Within context, remember the highest limit (7)
{EXTREME} – The highest or outer limit is hidden (within) in contEXT REMEber

24d   A second letter is read out in church (5)
{ABBEY} – A( from the clue) followed by B (second letter of the alphabet) and a slightly dodgy homophone (read out)  for IS ,as in BE, gives a type of church.  My least favourite clue today!

Isn’t 13d a splendid clue? My favourite but I like all the others in blue, a lot again this week..