Toughie No 648 by Osmosis

Just a Couple of Showers

This is an enjoyable, moderately difficult puzzle from Osmosis with, as usual from him, lots of clues involving initial letters, final letters, insertions and reversals. It has only two anagrams which may be some sort of record and certainly earns an extra enjoyment star from me.
Let us know how you found it and please take the time to click on one of the stars below to record your enjoyment factor.

1a   High-flier bans security, cutting back (6)
{CESSNA} – the name of a small aircraft manufacturer is hidden (cutting) and reversed (back) in the clue. It’s the aircraft that are small, not the manufacturer.

4a   Between you and me, trap is rigged somewhere in house? (8)
{UPSTAIRS} – the pronoun encompassing you and me goes round an anagram (rigged) of TRAP IS.

9a   Gravestone might display this in a French green (6)
{UNRIPE} – the definition here is green. Put the letters often seen on a gravestone (or, based on its current state, on the Telegraph Puzzles website) inside “a” in French.

10a   Party animal passed over bar a drug in each hand (8)
{REVELLER} – reverse (passed over) a bar and add E(cstasy) between two hands to make a party animal.

11a  Fatty food nut gobbles M&M — heading for illness? (8)
{PEMMICAN} – this food came from Native Americans and was adapted, as emergency rations, by arctic explorers. It’s a preparation of dried meat mixed with fat. Put an edible smooth-shelled nut around (gobbles) the two Ms and the first letter (heading) of I(llness). 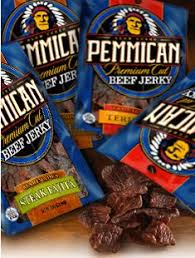 15a  Nag spouse latterly during dad’s 1930s film (5,8)
{HORSE FEATHERS} – this is a Marx Brothers comedy (at least it was intended to be a comedy – I’ve never found them very funny) from 1932. Start with what a nag is, then add another word for dad (plus the ‘S) with the last letter of (spous)E inside. 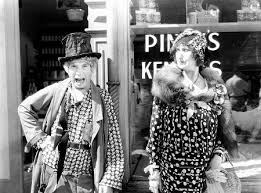 18a  Where Lancashire river anglers go, we hear, until the match’s final stages? (4,2,3,4)
{DOWN TO THE WIRE} – this is a phrase indicating a close contest right to the end which derives from American horse-racing but is now trotted out regularly for other sports and, especially, for elections. The destination of the anglers sounds like (we hear) a river which enters the Irish Sea at Fleetwood in Lancashire.

22a  Junkie confronted prosecutor, policeman and court (6)
{ADDICT} – reverse (confronted) the abbreviation for an American state prosecutor then add abbreviations for a senior detective and court.

24a  Set hour with A Study in Scarlet (8)
{HARDENED} – this is nothing to do with Sherlock Holmes but it’s a lovely clue. The definition is set or solidified. Start with H(our) and add A and then a study inside a synonym for scarlet.

26a  One inspects digger after fire’s repelled (8)
{EXAMINER} – someone who inspects is a digger after a verb meaning to fire or dismiss is reversed (repelled).

27a  Dim one left cashbox on counter (3-3)
{ILL-LIT} – join together I (one), L(eft) and a cashbox reversed (on counter) to make an adjective meaning dim or poorly illuminated.

28a  In retrospect, Web surfing, in extreme cases, attracts fanatic element (8)
{TUNGSTEN} – this element is a steel-grey metal. Bring together an informal word for the Web, the outer (in extreme cases) letters of S(urfin)G and a slang word for a fanatic, then reverse the lot (in retrospect).

29a  Press buttons again? This closes your car (6)
{RETYPE} – a verb meaning to use a keyboard once more is the final letter (this closes) of (you)R followed by a classic British sports car (1-4). Pommers will be jealous of this picture opportunity.

1d  Heavy-footed Gaelic man leaves a party unfulfilled (6)
{CLUMPY} – this is an adjective meaning having a heavy tread. Combine a Gaelic and Scottish male forename (which means dove) without the A (leaves a) and an empty (unfulfilled) P(art)Y.

2d   Maritime craft, self-contained, limits fruit (9)
{SCRIMSHAW} – this is an artistic, rather than sea-going, craft carried out by sailors and is the engraving or carving of designs on sea-shells, whales’ teeth and the like. Start with the abbreviation for self-contained, then add a word meaning limits or edges and a red fruit that grows wild.

3d  On jetty, leg turned comparatively cold (7)
{NIPPIER} – reverse an informal word for a leg on top of a synonym for jetty to make a comparative meaning colder.

5d  Right to split ginger, chopping food? (4)
{PREP} – insert R(ight) inside (to split) a verb meaning to invigorate or ginger up to make an informal abbreviation for getting things ready (for a meal, perhaps).

6d  Head to the outskirts to evade explosion — one might enter a bunker (3,4)
{TEE SHOT} – the first letter (head) of T(he) is followed by the outer letters of E(vad)E then a blast or explosion. The whole thing is your drive on a golf course which may, if your aim is not very good, enter a bunker.

7d  Dragon perhaps mentioned in folk legend (2-3)
{IN-LAW} – this is a non-blood relation that you may acquire. The female of the species may sometimes (perhaps) be referred to as a dragon. According to the clue (but not to me) it sounds like (mentioned) in and traditional learning passed down through the generations.

8d  Half of Surrey players initially go up to bowl over (8)
{SURPRISE} – half of the word Surrey is followed by the first letter (initially) of P(layers) and a verb to go up to make a verb meaning to bowl over or flabbergast.

14d  Roman number used during visit by accountant (6)
{SENECA} – there were two famous Romans with this name (father and son). Insert the abbreviation for number into a verb meaning to pay a visit to and add one of the abbreviations for an accountant.

16d  Quivering tree put everyone in a state all the time (9)
{ETERNALLY} – here we have only the second (and last) anagram in the puzzle. The letters of tree need to be rearranged (quivering?) then follow this by putting a synonym for everyone inside the abbreviation for a US state.

17d  Neighbouring worker keeps record-player in top condition (8)
{ADJACENT} – the usual Crosswordland worker contains (keeps) someone who plays records for a living and an adjective meaning in top condition.

19d  Nervous habits stifling performance — the subject of pre-match talk? (7)
{TACTICS} – what Martin Johnson obviously failed to get across in his pre-match talk last weekend is nervous mannerisms containing (stifling) a stage performance.

20d  Excessively treat Asian runner, removing toe (large) (7)
{INDULGE} – this is a verb meaning to give someone too many treats. Remove the toe (i.e. the bottom letter in a down clue) from a major river in Pakistan and add a 3-letter abbreviation for large.

21d  White Swan’s old comedian Jack welcomes non-boozer (6)
{ODETTE} – this is the name of the princess turned into a white swan in Tchaikovsky’s ballet. Start with O(ld) then add the surname of a comedian called Jack with the abbreviation for a non-boozer inside (welcomes).


23d  Some plumbing finally added before shower installed (5)
{DRAIN} – this is some plumbing. The last letter (finally) of (adde)D precedes a shower (but not the same feature that we had in 13a).

25d  Typical movement by 21, lowest class, beneath aeroplane (4)
{JETE} – a graceful movement by 21d, for example, comes from the lowest social class after (beneath, in a down clue) a modern aeroplane.