Hola from the Vega Baja.  First I would like to say a big thanks to the DT crossword editor, Phil McNeill, for emailing me the puzzle at midnight last night, otherwise you might not have had a blog today! Also thanks to Libellule for organising it.

As for the puzzle – a bit trickier than the last couple of weeks, I thought, so I’ve gone for 3* difficulty. Although about 80% of it went in easy enough I sort of ground to a halt on the last 3 or 4 so I’ll blame it on brain fade at 0100CEST! The only thing wrong with this puzzle is a distinct lack of picture opportunities but I’ve had a go (and managed a car)!

1a.    Secret doom dogs family (11)
{CLANDESTINE} – Definition is secret. Take a word for family (Scottish) and follow (dogs) with a word meaning doom or fate. I don’t think I’ve ever seen this word for fate without a D on the end but I looked it up to check!

9 a.    Ditch worker for cutting (9)
{TRENCHANT} – A word meaning cutting, as in a cutting remark perhaps, is a charade of a ditch and one of the usual workers.

10 a.    What a warbler might do in source of trout stream? (5)
{TRILL} – Think bird for warbler, not the Toughie setter! The sound a bird may make is T (source of Trout) followed by a type of stream , often found in a landscaped garden.

11 a.    Part of play concerned with court proceedings (6)
{ACTION} – The first part of a play followed by a word meaning concerned or about gives a court proceeding or legal ******.   Not 100% sure this clue is really fair but I like it, maybe you’ll disagree !

12 a.    Spoilt devil given broadcast (8)
{IMPAIRED} – One of the usual devils followed by a word for broadcast gives a word meaning spoilt or damaged.

13 a.    Hard work plus a new catchphrase (6)
{SLOGAN} – Take a word for hard work, A (from the clue) and N(ew) and you’ll get a catchphrase used in advertising. Is this one a candidate for the rest home for retired crossword clues?

15 a.    Providing workers stick at home, start grumbling (8)
{STAFFING} – The definition is ‘providing workers’. Take a stick or rod, IN (at home) and G (start Grumbling). Put the lot together and you get the answer.

18 a.    How one might resent beer? (8)
{BITTERLY} – Cryptic definition of how you might resent something. Can’t think of a better explanation at the moment but I think this is my favourite!

19 a.    Hide from vet (6)
{SCREEN} – Double definition. How you might hide something is also a word meaning vet, in the sense of checking out.  I was a victim of ‘positive vetting’ once when pommette was doing a job for the RAF! At least I didn’t get thrown in the Tower of London!

21 a.    In what way is a lemon sweet? (8)
{SEMOLINA} – This rather horrible sweet or pudding (IMO anyway) is an anagram (in what way) of IS A LEMON. Disgusting stuff I used to get with school dinners! 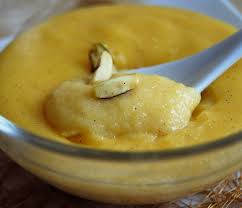 23 a.    Tries to deceive banks (6)
{BLUFFS} –These high, steep banks of a river or shoreline are also a word meaning tries to deceive, in a game of poker perhaps.

26 a.    One dries a tear finally, swallowing anger (5)
{AIRER} – Somewhere you may hang your clothes to dry is A (from the clue) and R (teaR finally) with a word for anger inserted (swallowing).

1d.    Blade made from copper salts being forged (7)
{CUTLASS} – CU (chemical symbol for copper) followed by an anagram (being forged) of SALTS give a blade beloved of pirates. 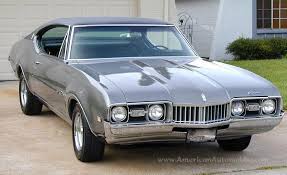 2 d.    Ward off disaster at last during a check (5)
{AVERT} – Definition is ward off. Take A (from the clue) and a word meaning check out and insert R (disasteR at last). We’ve got ‘vet’ meaning check again!

3 d.    Degree given to redcoat in error (9)
{DOCTORATE} – An anagram (in error) of TO REDCOAT gives a higher degree.

4 d.    Feet up, for a change (4)
{SWAP} – Reverse (up in a down clue) the feet, of your dog or cat perhaps, and you get a word for change or exchange. This was my last in! No idea why as it’s one of the easier clues but I had real case of brain fade here!

8 d.    One King George invading American state becomes a headache (8)
{MIGRAINE} – Insert I (one) and GR (George Rex) inside a state in the NE of the USA to get a nasty headache that usually requires lying down in a darkened room to get rid of it.

16 d.    Key service elevators getting cosmetic alterations (9)
{FACELIFTS} – A musical key followed by a service in tennis that isn’t returned and the English word for what the Americans call elevators gives some cosmetic surgery.

17 d.   Food for fish board has not raised (8)
{PLANKTON} – These microscopic creatures eaten by whales as well as fish are a word for a board or length of wood and TON (NOT reversed – raised in a down clue).

18 d.    A way to support bankrupt flyer (7)
{BUSTARD} – Place A (from the clue) and an abbreviation for way or road after (support in a down clue) a slang term for bankrupt and you’ll get a large bird, sadly now extinct in the UK but still surviving in Europe and Asia. 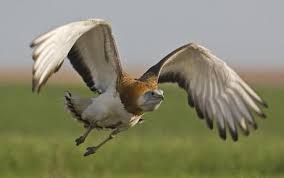 20 d.    Unusually tense, going outside for money put aside (4,3)
{NEST EGG} – An anagram (unusually) of TENSE followed by GG (GoinG outside) give a bit of money put aside for a rainy day.

25 d.    Beats a retreat, protecting ruler (4)
{TSAR} – This ruler of Russia is hidden in (protecting) beaTS A Retreat.  Another one for the retirement home?

I like all the ones in blue but favourite is 18a.