A very enjoyable puzzle from one of this week’s mystery setters (but I have a suspicion as to who it might be!). My only grumble is that 1 across may be a bit too difficult for some.

1a Refined sort accompanied by small number tucking into select meats? (10)
(GASTRONOME} – this all-in-one clue defines a lover of good food and wines – put an anagram (refined) of SORT and NO (small number) inside (tucking into) select meats from animals hunted for sport – that was a bit tough for a back-page puzzle!

10a Not a regular local porter? (5,4)
{GUEST BEER} – a cryptic definition of an ale which is only on sale for a limited period (usually until the barrel runs out!)

12a Decoration is taken in by Latin knight in pointed monument (7)
{OBELISK} – start with an honour awarded by Her Majesty and follow it with IS, from the clue, inside L(atin) and K(night) 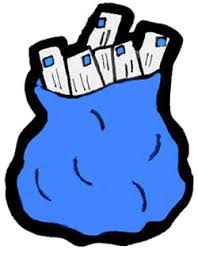 22a Plan to dispense with European house in state (5)
{IDAHO} – take a plan or thought, drop (dispense with) the E(uropean) and add HO(use) to get a US state

5d Animal always close to desk occupying rug (7)
{MEERKAT} – this mongoose-like South African animal, which has been the subject of a recent television series, is constructed from the poetic word for always and the final letter of (close to) desK inside a rug

8d Insulting scoundrel detaining Queen, a right-winger (10)
{DEROGATORY} – this adjective meaning insulting is created by starting with a scoundrel (3), inserting (detaining) Elizabeth Regina (Queen) and then adding A, from the clue, and a right-wing politician

16d Instrument shown by low singer in the nude? (7)
{BASSOON} – this large woodwind instrument comes from a low-voiced singer with O ON (nothing on / in the nude)

18d Composer prepared a short track list (9)
{SCARLATTI} – this Italian composer could be Alessandro, the father, Domenico, the son, or perhaps another member of the same family – he’s an anagram (prepared) of A TRAC(K) (short track) LIST

20d Sensational grounds shown on the internet? (7)
{EMOTIVE} – an adjective meaning sensational comes from the grounds, perhaps for committing an offence, preceded by (on) the usual prefix for internet-related services

21d Foreign character beginning to discover what’s opposite to sharp estuary feature (7)
{MUDFLAT} – a charade of a Greek character, the initial letter of (beginning to) Discover and the opposite, in music to sharp gives a feature of a river estuary

Someone managed to sneak in to take this picture of the Telegraph Puzzles development team at work on the improvements to the site: