We have a fairly standard puzzle from Giovanni today with several fairly easy clues to get you started, then a few to make you think a little bit more. Let us know how you got on.
If you want to see an answer just highlight the space between the brackets under the troublesome clue.

5a  Excel almost certainly with success in exam (7)
{SURPASS} – a verb meaning to excel or outdo is a charade of most of a word meaning certainly and success in an exam.

7a  Jog along with husband in old-fashioned marriage pledge (5)
{TROTH} – an old-fashioned word for faith or loyalty (at one time associated with plight in a marriage service) comes from a verb to jog followed by (along with) H(usband).

13a  Wicked demon has head chopped off (4)
{EVIL} – decapitate (by chopping off the initial D) a demon to leave an adjective meaning wicked.

14a  Ancient doer of wrong in alliance (13)
{CONFEDERATION} – this alliance is an anagram (wrong) of ANCIENT DOER OF.

16a  Little skip for which rubbish would be a bit too much (4)
{TRIP} – this was the last answer I got. A slang word for rubbish or nonsense is shortened (by dropping its final E) to leave a light short step or skip.

19a  Thus go round when you hear wine mentioned (8)
{SAUTERNE} – homophones (you hear … mentioned) of an adverb meaning thus or in this manner and a verb to go round or revolve are combined to make a sweet white French wine. In my student days when this appeared quite sophisticated (and more importantly, cheap) I never remember seeing a bottle without a trailing S on its name but Chambers does allow both spellings.

22a  Object first off to Ecstasy and joint (5)
{HINGE} – drop the initial T (first off) from an object and add E(cstasy) to make the sort of joint on which a door swings.

23a  Girl gets round with little hesitation, rancher on horseback? (7)
{LASSOER} – string together a synonym for girl, O (round) and a short interjection expressing hesitation to make what you could conceivably call a rancher or cowboy catching livestock from the back of his horse. 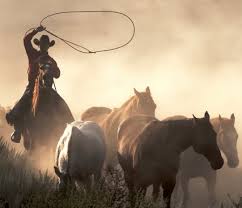 1d  Clever person, not one for healthy food? (4)
{BRAN} – a metaphor for a clever person loses its I (not one) to leave the roughage that we’re all urged to eat as part of a healthy diet.

2d  Salt gives food item value (8)
{TARTRATE} – salt here is not, as I first thought, a synonym for sailor and part of the wordplay, but the definition and something that you may have come across in chemistry lessons. A verb meaning to value is appended (gives) to an item of food with a pastry base.

3d  Affected man at party you previously upset (6)
{STAGEY} – this is an adjective meaning affected or excessively theatrical. Start with a man attending a male-only party and add an old (previously) word for you which is reversed (upset, in a down clue).

4d  Becoming rude could make a son cringe (10)
{COARSENING} – the answer means becoming rude or less refined and an anagram of it could make A SON CRINGE.

5d  Music ultimately reaches heart (5)
{SCORE} – the ultimate letter of (reache)S is followed by a synonym for heart to make the music for a film or stage show.

6d  PM could bring out reporters’ bile (3,6,4)
{SIR ROBERT PEEL} – this nineteenth century prime minister (who was credited, during his time as Home Secretary, with laying the foundations for the modern police force) is an anagram (could bring out) of REPORTERS’ BILE.

14d  Ford’s place for getting wet? (3-4)
{CAR-WASH} – cryptic definition of where a Ford (or any other vehicle) is deliberately made wet.

15d  One tending certain insects — a very good skill is needed in that (8)
{APIARIST} – someone who looks after bees is constructed from A, an abbreviation meaning very good or holy and a skill with IS inside it.

17d  Fat monarch gets food supply (6)
{LARDER} – this word can mean both where perishable foods may be kept (more so in the days before refrigerators) and the food itself. Combine a type of fat and the initials used by our current monarch.

18d  Fluid of the gods seen in rich ornamentation (5)
{ICHOR} – hidden (seen) in the clue is the fluid which the old Greeks thought flowed through the veins of their many gods.

21d  Strange objects visible to all, loud and huge (4)
{UFOS} – these strange, often crockery-shaped, objects are made from three abbreviations: a) the letter once used by the film censors to indicate that a film could be seen by everyone, b) the musical abbreviation meaning loud and c) huge, in clothes sizes.

I enjoyed 16a, 15d and 21d today but my favourite clue was 11a. Let us know what tickled your fancy.