Toughie No 628 by Notabilis

I’ve stopped trying to submit puzzles on the website except when I’m blogging (because I’m fed up with getting “Error 0”), but it’s just as well I did this morning because my answer to 25d was rejected – see below.
Apart from that we have a not too taxing but entertaining puzzle from Notabilis. It seems to be the rule now that when setters like Micawber and Notabilis appear mid-week their puzzles are quite a bit gentler than when they turn up on Fridays.
Notabilis usually manages to smuggle something extra into his puzzles just to keep us on our toes and today there are four sets of linked answers (13/14a, 22/23a, 3/15d and 16/26d). If there’s anything else, I’ve failed to spot it.
Give us a comment letting us know how you got on and please take the time to click on one of the stars below to register your level of enjoyment.

1a  Supposing that infiltrating US agent was like a whistle-blower? (5)
{FIFED} – put a conjunction meaning supposing that inside the informal term for a US federal lawman to form how someone with a small flute or whistle might be described cryptically.

4a  Fish to fill a hulk at sea, or pass under it? (8)
{KEELHAUL} – this relates to a barbaric old punishment at sea when a miscreant was dragged under the ship from one side to the other. Insert a fish in an anagram (at sea) of A HULK.

10a  Filling for some pasta or apricot tart (7)
{RICOTTA} – this soft Italian cheese can be used as a filling for pasta but filling also indicates that the answer is hidden in the clue.

11a  Border with unopened flower enthrals a poet (7)
{RIMBAUD} – start with a synonym for border then add an unopened flower with A inside (enthrals) to make a nineteenth century French poet. When the footballer Eric Cantona mentioned him as one of his early influences during an interview, the British football writers (not used to cultural footballers) assumed that he was talking about the Sylvester Stallone character.

13a  Break off end of chocolate in box (5)
{CEASE} – a verb meaning to break off or desist comes from inserting the end letter of (chocolat)E in a box.

14a  Dismiss feminine fury (4)
{FIRE} – a verb to dismiss is F(eminine) followed by a synonym for fury.

17a  Petty officer in inclination to cut stir, adapting trivial punishment (4,2,3,5)
{SLAP ON THE WRIST} – this is a trivial or token punishment. Start by putting the abbreviation for Petty Officer inside an inclination or slope, then add a verb meaning to cut or chop. Finish off with an anagram (adapting) of STIR.

19a  Plummy addition (possibly kitchen coinage) (5,2,3,4)
{ICING ON THE CAKE} – an anagram (possibly) of KITCHEN COINAGE gives us a desirable (plummy) addition to something that is already pretty good.

22a  Turn page in boozer (4)
{SPOT} – a brief performance or turn comes from inserting P(age) in a heavy drinker.

23a  Control constant blazes (5)
{CHECK} – a synonym for control is formed from the constant used for the speed of light and a milder euphemism for hell or the blazes therein.

24a  See in Tom, Dick or Harry a god (4)
{JOVE} – put the single-letter abbreviation meaning see inside the name given (mainly in North America) to an ordinary man (like the other three ordinary men in the clue). The result is the chief Roman god.

27a  Pak choi is plant regularly cut up for root starch (7)
{TAPIOCA} – this is a starchy substance made from cassava (used in a pudding that we used to get a lot in school dinners – generally known as frogspawn). It’s found in every other letter (regularly) reversed (cut up) of “pak choi is plant”. 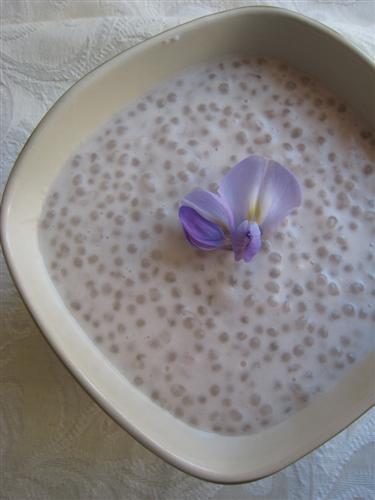 28a  Small complaint before one grasps hard African language (7)
{SWAHILI} – start with S(mall) and then put H(ard) inside a complaint or expression of grief and follow that with I (one) to make an African language.

29a  Public address wicked lives with ecstasy or bliss (8)
{PARADISE} – the definition here is bliss. The abbreviation for public address is followed by a short form of radical (which is apparently used in the US as a slang term for excellent or wicked), a synonym for lives (as a verb) and E(cstasy).

30a  Line incorporated by act towards sound system (5)
{DOLBY} – put L(ine) inside a phrasal verb (2,2) meaning act towards to make the name of a proprietary sound system.

1d  A few rising in garrison will be top-ranked (8)
{FOREMOST} – a word for a few is reversed (rising) in another word for garrison.

2d  Fish swimming round capital are reddish-purple (7)
{FUCHSIA} – an anagram (swimming) of FISH goes round the abbreviation for a capital (as opposed to lower-case) letter and this is followed by the abbreviation of A(re) (are, here, being not the verb but a unit of metric land measure). The whole thing describes a reddish-brown colour named after a German botanist.

5d  Barbarian occupiers smite opposition to Federation (14)
{EUROSCEPTICISM} – an anagram (barbarian?) of OCCUPIERS SMITE produces a  philosophy covering shades of opinion ranging from not wanting any further continental integration to wishing to raise a drawbridge at Dover.

6d  Sign of growth heading off reversal of boom (4)
{LUMP} – remove the initial S (heading off) from the opposite of a financial boom.

7d  Plants spies among industrial relations group (7)
{ACACIAS} – the usual US spies are rendered inside the group tasked with bringing the two sides of an industrial dispute together to make thorny shrubs with yellow or white flowers. 8d  Left for dead in stratagem’s retreat (5)
{LODGE} – this is a retreat or a secluded dwelling. Start with a stratagem or ruse and replace the first D with L (left for dead).

9d  Two with heavy habits wasted benefit from incompatible situations (4,2,4,4)
{HAVE IT BOTH WAYS} – an anagram (wasted) of TWO and HEAVY HABITS gives us a phrase meaning to both keep one’s cake and eat it.

15d  Limit uranium in atomic force (5)
{BOUND} – a synonym for limit is made by putting U(ranium) inside a strong force of attraction holding atoms together.

20d  One splits first element installed in boiler (7)
{CHOPPER} – the chemical symbol of the first element in the periodic table goes inside an old boiler (because that’s what they were made from) to make something used for splitting.

21d  When transforming, a coil is avoiding contact (7)
{ASOCIAL} – a word meaning when is followed by an anagram (transforming) of A COIL to describe someone who’s a bit of a loner. Thanks to Crypticsue for supplying the correct wordplay.

22d  Places turned over when European enters organisation (3-2)
{SET-UP} – a verb meaning places is reversed (turned over) and E(uropean) goes inside it.

25d  Female with very mature bust (4)
{FOLD} – append an adjective meaning very mature to F(emale) to make a verb meaning (of a company) to cease functioning or go bust. The answer given on the website, which is obviously incorrect, is {FOND} – I used two hints to establish this after the correct answer was rejected. At least the surface lends itself to a picture …