It may be just a smear to you, mate!

We have a super midweek Toughie today from Elkamere. It’s a pangram and I enjoyed it a great deal.
Let us know what you thought and please remember to click on one of the stars below to record your enjoyment factor.

7a  Bad hospital’s excessive demand for blood? (7)
{HARMFUL} – this is a lovely allusion to the classic Tony Hancock programme “The Blood Donor”. Start with H(ospital) and add what the lad thought a pint of blood was almost equivalent to.


8a  What oven cleaner is of no relevance? (7)
{ANAGRAM} – if you rearrange the letters of “oven cleaner” you get “no relevance” so one must be this of the other.

10a  Surrounded by concrete, picks up drill (9)
{REHEARSAL} – a synonym for concrete, as opposed to virtual, goes round a verb meaning picks up or finds out to make a drill.

11a  Remedies bring back the other condition (5)
{FIXES} – start with what “the other” is used as a humorous euphemism for and add a conjunction introducing a condition or provision. Then reverse (back) the lot to reveal a synonym for remedies.

12a  Anger about book in Scripture (5)
{BIBLE} – a synonym for anger contains B(ook) to make the ultimate authority on scripture in some religions.

13a  Comedian mostly repelled after dad sees photographers (9)
{PAPARAZZI} – the surname of Eddie, the comedian, without his final D (mostly) is reversed (repelled) after a childish name for dad to make photographers.

17a  Romantically dark, cruel irony in ancient times (7)
{BYRONIC} – an adjective meaning dark and moody and relating to the Romantic poet is formed by putting an anagram (cruel) of IRONY inside the abbreviation indicating a date prior to the start of Christianity.

18a  An overdue rerun for Morse (9)
{ENDEAVOUR} – an anagram (rerun) of AN OVERDUE gives us the eventually-revealed forename of the tetchy inspector.

20a  Where violin goes to be fitted with a string (5)
{CHAIN} – what a violin is tucked under to be played has A inserted (fitted with) to make a string or series.

21a  Dallas family’s European branch (5)
{EWING} – the surname of JR, Swellin’ and the whole ghastly clan is E(uropean) followed by a branch or faction.

23a  German aristo welcoming support of driver, jolly sort? (9)
{JUNKETEER} – a young Prussian aristocrat of the past goes around (welcoming) what a golfer using a driver sticks in the ground to support his ball. The result is a merrymaker.

24a  Common man on dope (7)
{GENERIC} – a man’s name (think of Mr Idle of Python fame) goes after an informal word for dope or information.

25a  Drivers learning to hide behind land boundary (7)
{ABUTTAL} – this is the boundary or junction where two structures come together. A motoring organisation (drivers) and the letter used for a learner driver contain (to hide) the (mainly American) slang word for behind or buttocks. I’m not sure about the use of learning for L – it can certainly be used for learner, but learning? Perhaps I’ve missed something.

1d  Not allowed to dig without welcome snack (10)
{PROHIBITED} – the definition here is not allowed. A verb meaning to poke or dig (in the ribs, perhaps) contains (without) a welcoming cry and a small snack.

2d  Recently dead, buried in old earth (2,4)
{OF LATE} – this phrase means recently. Put a description of something (a battery, perhaps) which is dead inside (buried in) O(ld) and E(arth).

3d  Top shelf could be where naked ladies are (5,3)
{FLESH POT} – an anagram (could be) of TOP SHELF provides a picture opportunity!

4d  With each round, soft drink (6)
{WALLOP} – a slang word for beer is formed by stringing together W(ith), a synonym for each or every, a round letter and the musical abbreviation for soft.

5d  I travel much lighter without one (8)
{WAYFARER} – someone who travels could be formed by removing the I (one) from an informal way of saying much lighter or paler (3,6).

6d  Antelope and bull crossing railway (4)
{ORYX} – a large antelope’s name is formed from a castrated male bovine animal around (crossing) the abbreviation for railway. 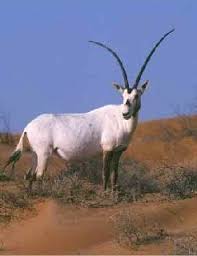 7d  Serving soldiers won’t invade easily (4-6,3)
{HARD-BOILED EGG} – this is a lovely cryptic definition of a serving which may have been cooked too long for the soldiers to be able to be dipped in it at breakfast.

14d  Sacred texts of Buddhism Cameron’s upset at (4-6)
{ZEND-AVESTA} – these are Zoroastrian sacred writings. Start with a flavour of Buddhism, add how Mr Cameron allegedly likes to be addressed and the ‘S, then finish with a reversal (upset) of AT.

17d  Imposing pub I’ll enter on a lake (8)
{BARONIAL} – a description of something imposing or impressive in appearance starts with a synonym for pub, then this is followed by ON A L(ake) with I inserted.

20d  Payment confirmed by phone? (6)
{CHEQUE} – a method of payment which appeared to be on the way out but which has now apparently been reprieved sounds like (by phone) a (mainly North American) word signifying confirmation or agreement.