Toughie No 603 by Cephas

The Ladies of the Harem (of the Court of King Caractacus)

This standard “Tuesday” Toughie was a bit easier than last week’s Micawber. Even the large number of answers with double unches (albeit with 50% checking) couldn’t make it difficult!

3a    I name meeting-place for court order (10)
{INJUNCTION} – a charade of I, N(ame) and a place where roads meet gives a court order 11a    It’s counteractive and, boy, it’s volatile (8)
{ANTIBODY} – this substance which inactivates a foreign body is an anagram (volatile) of AND BOY IT

13a    Fellow getting into fruit, he is excessively fond of food and drink (8)
{GOURMAND} – put a fellow or chap inside a large hard-rinded fleshy fruit to get a glutton

21a    Meditate on food eaten? (4,4)
{CHEW OVER} – a phrasal verb meaning to meditate on could mean that one has finished eating

23a    Abseiling, caught short and losing head by lake (6)
{RAPPEL} – A word meaning abseiling is derived by taking a word meaning caught or cornered and removing the final (short) and initial (head) letters and then adding L(ake)

4d    Promontory in Denmark? (7)
{JUTLAND} – a (hardly) cryptic definition of a promontory part of which is in Denmark 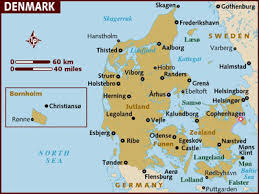 5d    ID card displayed in celebrity kiss chase? (4,3)
{NAME TAG} – a ID card showing the name of the person who wears it is a charade of a celebrity and a children’s game

6d    Drawing thicket with bushman travelling round loch (9,6)
{THUMBNAIL SKETCH} – this small drawing is created by putting an anagram (travelling) of THICKET with BUSHMAN around L(och)

Things can only get Tougher!