1a           A rash paper upset state, in other words (10)
It’s always nice to have an anagram to start off – upset state indicates that A RASH PAPER needs to be reorganised to get a verb meaning to put in other words 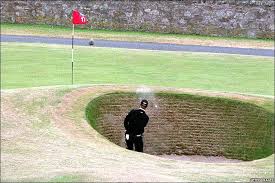 15a         A part of our navy engaged in carrying soldiers and resources for war (8)
Combine A, from the clue, a part of the navy (2) and a word meaning engaged in (2) and put them around some soldiers to get some resources for fighting  a war

22a         Opening statement for meeting after PM arrives (4,9)
What one says when meeting someone after the start of pm, as opposed to am

27a         In middle of a decade, second time it’s extremely dry (10)
Start with a particular decade and then insert S(econd) and add T(ime) to get an adjective meaning  extremely dry or parched

3d           Under pressure, foolishly arrest action, hence delay (13)
After (under in a down clue) P(ressure) put an anagram (foolishly) of ARREST ACTION to get the thief of time

20d         Not too hard to defend with one incompetent in football team? (7)
An adjective meaning capable of being defended, if split (3,4) describes those in a football team excluding one who is incompetent