We were taken to task yesterday, in a comment from StevieG, for referring to some puzzles as fairly straightforward, because this might be discouraging to some solvers who don’t find them straightforward at all. However, if we’re writing a review we have to be able to say how difficult we found the puzzle relative to the average back-pager, and in my opinion this one is, well, fairly straightforward. It does have a few entertaining clues (but too many anagrams for my taste). Do feel free to agree or disagree.
If you want to see an answer just drag your cursor through the space between the brackets under the clue.

6a  Hit book for essayist (4)
{LAMB} – an informal verb to hit hard (rarely seen outside crosswords) is followed by B(ook) to make the surname of the English author who wrote Essays of Elia.

10a  Puts nuts outside back of cage, creating agitation (5)
{UPSET} – an anagram (nuts) of PUTS goes around the last letter (back) of (cag)E.

11a  Partner developing sea-coast around island (9)
{ASSOCIATE} – the definition here is partner (normally used in the business rather than relationship sense). It’s an anagram (developing) of SEA-COAST around I(sland).

12a  Satisfied completely by one cold tinny (8)
{METALLIC} – this has a nice surface reading with the setter wanting you to think of tinny as a noun meaning a can of XXXX or similar down under. As the definition here, however, it’s an adjective, built from a verb meaning satisfied or matched, a synonym for completely, I (one) and C(old). 15a  Left maintaining saint was alive (7)
{EXISTED} – the definition here is was alive. A verb meaning went out or left contains (maintaining) the single-letter abbreviation for saint.

19a  Moaning Higgins goes to pot (7)
{SIGHING} – the surface here is all about snooker and, depending on your age, Higgins might be the late, wayward Alex “Hurricane” or the current world champion, John. The answer is an anagram (goes to pot) of HIGGINS. 22a  Near heart of total darkness (5)
{NIGHT} – an old word meaning near precedes the middle letter (heart) of (to)T(al).

24a  A long time since wrinkly’s operations (8)
{AGENCIES} – a word meaning a long time is followed by an anagram (wrinkly) of SINCE.

27a  Curse babe’s mixed grills (9)
{BARBECUES} – we have yet another anagram (the fifth in six clues). This time the indicator is mixed and the fodder is CURSE BABE.

28a  Offensive fabrication in article (5)
{ALIEN} – an adjective meaning offensive or distasteful is formed by putting a fabrication inside the indefinite article.

30a  Switch in aircraft that helps you to see (10)
{FLASHLIGHT} – switch (either as a noun or verb) can mean whip, so insert a synonym for this inside a group of aircraft operating as a unit.

1d  Noisy couple turning up to back Liberal (4)
{LOUD} – reverse (turning up, in a down clue) a couple (of musicians, possibly) and put it after (to back) L(iberal).

2d  Meeting some swans we ringed (9)
{ANSWERING} – hidden (some) is a present participle meaning meeting or satisfying.

3d  Run over (5)
{EXTRA} – one of the two words in the clue relates to cricket (and this time it’s not over!). This is a double definition – a run in cricket which is added to the team’s total but not to that of any individual batsman and a synonym for over or in excess.

4d  A nerd’s worried about beginning of line getting tangled (7)
{SNARLED} – an anagram (worried) of A NERD’S goes around the first letter (beginning) of L(ine).

5d  Small creatures in schools (7)
{INSECTS} – these small creatures are formed from IN (given to you in the clue) and another word for schools (groups of people with a shared religious or philosophical outlook).

9d  Twisting body in grass (8)
{SCREWING} – put a body (of shipmates, possibly) inside an informal verb meaning to be an informer (grass). I don’t think I’d get away with a picture here.

16d  Prime time and neither’s broadcast (8)
{THIRTEEN} – start with T(ime) and follow this with an anagram (broadcast) of NEITHER to make a prime number.

20d  Good artist to celebrate coming up step-by-step (7)
{GRADUAL} – the definition here is step-by-step. Join together G(ood), the abbreviation for a top artist (Royal Academician) and a verb to celebrate or praise which has to be reversed (coming up, in a down clue).

21d  Priest hires suits (7)
{PLEASES} – the single letter abbreviation for priest is followed by a synonym for hires to make a verb meaning suits or satisfies.

23d  US soldier starts to raise Luger and stupidly misses (5)
{GIRLS} – the definition here is misses or young females. Start with the abbreviation for a US soldier (for years I thought that this stood for General Infantryman but in fact it means Government Issue – it’s what soldiers called themselves because “Government Issue” was stamped on all clothes, shoes, guns and other equipment that they were given) and follow this with the initial letters (starts) of Raise Luger Stupidly.

26d  Shore bird’s rate of speed (4)
{KNOT} – another double definition – a short-billed sandpiper (whose name, Chambers informs us, is not related to King Canute) and a rate of speed at sea. 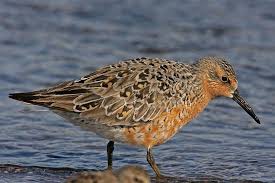 The clues which I liked best were 12a and 23d. What did you like?