A tale of crooks and child molesters!

After sailing through three-quarters of this puzzle, I found myself stuck in the southwest corner, until several pennies dropped one after the other. Beam never ceases to challenge and amuse me at the same time. My runaway favourite clue is 27 across.

1a    Detective taking single round, taken out, wasted (11)
{DILAPIDATED} – a senior detective  placed around I (single) and a circuit round a track (3) and followed by a word meaning taken out or courted gives an adjective meaning wasted or ramshackle

10a    Talk posh upset by English etiquette (5)
{USAGE} – reverse (upset – is this ok in an across clue?) idle talk (3) and the one-letter word used in Crosswordland for posh and follow them with E(nglish) to get etiquette or tradition

12a    Flogging with belt catching end of huge rump (9)
{RETAILING} – not flogging, as in beating, but flogging as in selling! – put a belt or circle around (catching) E (end of hugE) and rump or rear 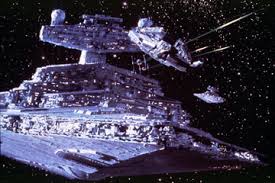 16a    Lewis catching more ruddy crooks! (8)
{CROSIERS} – put the initials of the author of The Chronicles of Narnia around a word meaning more ruddy to get these pastoral crooks carried by bishops – you are intended to think of Morse’s partner! 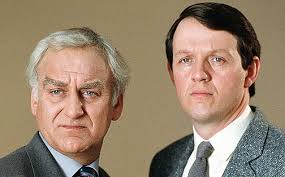 18a    Old beast old lady crushed, without love (8)
{MASTODON} – to get this extinct mammal start with the old lady or mother (2) and then add a phrasal verb meaning crushed (5,2) from which one of the Os has been removed (without love) 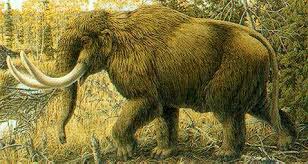 20a    Breather taking oxygen before end of exercise? Relax (6)
{LOUNGE} – put this respiratory organ around (taking) the chemical symbol for Oxygen and then add E (end of exercisE) to get a verb meaning to relax

24a    Delilah was one character taking time cutting hair (9)
{TRAITRESS} – having entered “temptress” here it took me a while to realise that it could not be supported by the wordplay! – to get what else Delilah was, put character or appearance (3) around T(ime) and then all inside (cutting) a long lock of hair 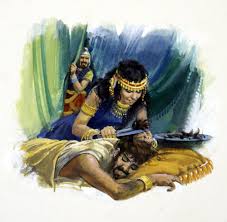 26a    Like a cadaver returned, one consumed by dead (9)
{EMACIATED} – ouch! – a word meaning cadaver-like is created by taking a phrasal verb meaning returned (4,4), using back, the second part, as a reversal indicator and following this with I (one), a word meaning consumed (3) and D(ead) – do I hear cries of “foul”?

27a    He played academic chasing child (5)
{MASON} – an excellent allusion to the Stanley Kubrick film based on the classic novel Lolita by Vladimir Nabokov – the name of the actor who played Humbert Humbert, a professor of classical literature, is a charade of a higher academic degree and a child – the whole clue summarises the plot of the film! 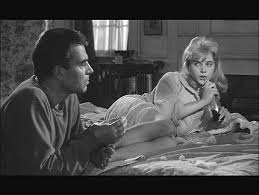 3d    Draw around empty easel in rising artist’s studio (7)
{ATELIER} – put a word meaning to draw or finish on level scores around E(ase)L without its contents (empty) and then put all of this inside Crosswordland’s usual artist reversed (rising) to get a studio or workroom, especially one used by an artist

5d    Story from Fitzgerald turned nasty (8)
{ALLEGORY} – to get this story, intended to be understood symbolically, reverse (turned) the first name of Miss Fitzgerald and add a word meaning nasty or brutal

7d    One provides support for privates? (13)
{QUARTERMASTER} – a cryptic definition of this officer who is responsible for the accommodation, weapons and supplies of a group of soldiers, including the privates

8d    Prod underneath stone fish (8)
{STURGEON} – put a phrasal verb meaning to prod (4,2) below the abbreviation for a stone in weight to get this fish

9d    Taking gang in critical setting (13)
{PREPOSSESSING} – an adjective meaning taking or attractive is created by inserting a gang of men summoned by a sheriff to enforce the law, or these days a gang of young friends, inside a word meaning critical or urgent

{FOOTSTEP} – take a charade of teachers favourites, a word meaning over or in addition and the abbreviation for F(ollowing) then reverse the lot (raised) to get a pace

19d    Sour face, in wrong place to score! (7)
{OFFSIDE} – a charade of a word meaning sour or rotten and a face of a solid object like a cube gives a position on the football pitch from which it is not possible to score a goal

21d    Perfect work compiler’s found in corporation (7)
{OPTIMUM} – a word meaning perfect or ideal is built up from the abbreviation for a musical work followed by “the compiler is” (1’1) inside corporation or stomach – I trust those that were caught out by this meaning of corporation didn’t fall for it this time!

22d    Land initially next to snake here? (6)
{LADDER} – the first letter (initially) of L(and) is followed by a snake that is found in the UK to get something found with the snake in a well-known board game 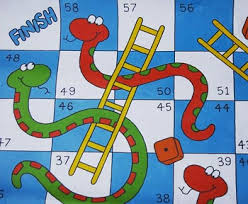 I struggled with some of the wordplay, but I think I got there in the end!