We have a fairly straightforward but entertaining puzzle from Giovanni today. Let us know how you got on with it.
To reveal an answer drag your cursor through the space between the brackets under the clue.

8a  I love diplomacy after end to war — it can restore order (4,3)
{RIOT ACT} – this is what used to be read out to a disorderly mob as a warning to disperse. Put I, O (love) and a synonym for diplomacy after (wa)R.

10a  Individual’s passionate on a particular occasion (3-4)
{ONE-SHOT} – something that happens on a single occasion only is a charade of an individual plus the ‘S and an adjective meaning passionate.

11a  Outlook for good little relative — no being hugged! (9)
{PROGNOSIS} – an outlook or forecast is built from a prefix meaning for, G(ood) and an abbreviated sibling with NO inserted (being hugged).

12a  Paper money I have cast into fire regularly! (5)
{FIVER} – put the contracted form of ‘I have’ inside (cast into) the odd (regularly) letters of fire.

13a  Sauce from troublesome person with nothing to add (5)
{PESTO} – add the letter that looks like zero or nothing to an annoying person to make an Italian sauce containing basil.

14a  Gaps girl found in fine material (7)
{LACUNAE} – a girl’s name is contained (found) inside a delicate fabric to make gaps or spaces.

17a  What upsets us — idle merriment (alcohol-related problem) (8,7)
{DELIRIUM TREMENS} – this is the full latin name for the alcohol-induced shakes normally abbreviated to the DTs (nothing to do with the Daily Telegraph!). It’s an anagram (upsets) of US IDLE MERRIMENT.

21a  Get to give a sermon, but not quietly (5)
{REACH} – the definition is get to. Remove the P (quietly) from a verb meaning to deliver a sermon.

24a  Head of catering demands items from the brewery (5)
{CASKS} – the first letter (head) of C(atering) is followed by a synonym for demands.

28a  Spendthrift wife alters when broke (7)
{WASTREL} – a spendthrift is W(ife) followed by an anagram (when broke) of ALTERS.

1d  Good news for the farmer, happen! (4,2)
{CROP UP} – in the surface ‘happen’ is being used in its North of England sense of ‘perhaps’ but what we want is a phrasal verb meaning to happen unexpectedly. The answer could also mean that the yield from a farmer’s fields has increased (though he’ll doubtless find something else to moan about!).

2d  Huge mountain feature needing rope for climbing (8)
{COLOSSAL} – start with a mountain pass (feature) and then reverse (for climbing, in a down clue) a rope used for catching cattle to make an adjective meaning huge.

3d  One may be eaten by a consumer munching (4,6)
{MAIN COURSE} – this is an all-in-one clue (i.e. the whole clue is both the definition and the wordplay with no redundant words). Put I (one) inside an anagram (munching) of A CONSUMER.

4d  After work, cleans out government office (9)
{CONSULATE} – there’s a strong temptation to think that ‘after work’ means that the answer will start with OP, but here it is an anagram indicator and what we want an anagram of is CLEANS OUT to make a government office in a foreign country.

5d  What may be rare complaint (4)
{BEEF} – double definition, the first something that may be cooked lightly (rare).

6d  Not all monks have, necessarily, to be tonsured (6)
{SHAVEN} – hidden (not all) in the clue is a past participle meaning tonsured.

7d  Gets the show on the road with the inclusion of the French actresses? (8)
{STARLETS} – a verb meaning gets going has a French definite article inserted to make young actresses with aspirations to become famous. 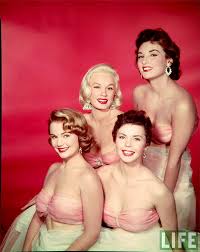 9d  Pilot is bad-tempered, short (4)
{TEST} – pilot here is a verb meaning to try something out (I think). It’s also an adjective meaning bad-tempered without its final Y (short). Thanks to Pommers and Gnomey for the discussion on whether pilot in the clue is a noun, adjective or verb.

16d  Macho fish will be all right (5-4)
{HUNKY-DORY} – an informal adjective meaning all right or fine is a charade of the informal description of a virile, sexually-attractive man (macho) and a narrow, deep-bodied fish.

17d  I am set up in manageable residence (8)
{DOMICILE} – reverse (set up, in a down clue) the contracted form of ‘I am’ inside an adjective meaning submissive or manageable.

22d  Defeated king had to admit diminished function (6)
{HAROLD} – the name of the king who was up to his eyes in problems in 1066 is HAD containing (to admit) a function or responsibility without its final E (diminished).

23d  Worry with wimps turning up (4)
{STEW} – reverse (turning up, in a down clue) Mrs Thatcher’s term for wimps to make a verb meaning to be in a state of agitation (worry).

25d  Understands report of capture (4)
{SEES} – a verb meaning grasps or understands sounds like (report of) to capture or take possession of.