10a         Cold wind loaded tree with snow, right? (9)
This cold wind is an anagram (loaded) of TREE with SNOW and R(ight) – note that the enumeration is actually (3’6) or (3’-6) but, in common with most other crosswords, the Telegraph doesn’t show apostrophes

23a         Fellow from Exeter or Lincoln, perhaps, or citizen of central England (7)
… Exeter and Lincoln are colleges at a university in central England

29a         Built or demolished, say (6)
this verb meaning built sounds like one meaning demolished 5d           European who works with crook that often helps police (6,8)
A charade of someone from a European country and someone who works with a crook looking after animals gives an animal often used to help the police 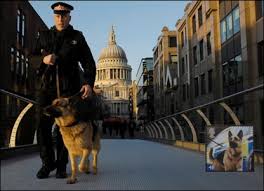 9d           Bad intentions, alas, found in some poetry (7,7)
An anagram (bad) of INTENTIONS ALAS gives some poetry of the kind written by Giacomo da Lentini and Francesco Petrarca