Toughie No 543 by Cephas

Nice ‘N Easy does it!

This puzzle from Cephas could easily have been a Saturday prize crossword. I’m sure the rest of the week will be more difficult.

1a    Second pun — could one be foiled by it? (9)
{SWORDPLAY} – a charade of S(econd) and a word, familiar to readers of this blog, that means a pun gives an activity that could involve using a foil 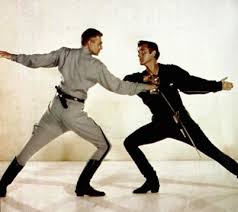 10a    Intoxication from tiny beer I ordered! (9)
{INEBRIETY} – a word meaning intoxication or drunkenness is an anagram (ordered) of TINY BEER I

11a    Refuse to talk about said meat at university (4,2)
{CLAM UP} – a phrasal verb meaning to refuse to talk is a charade of the single-letter abbreviation for about, a homophone (said) of a type of meat and a word meaning at university 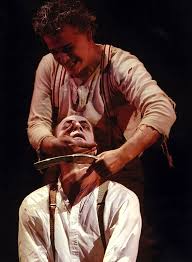 19a    Where one may go could be determined by accident (9,6)
{AMBULANCE DRIVER} – a gently cryptic definition – this paramedic attends the scene of an accident

21a    After end of term, one place setting (6)
{MILIEU} – a charade of the last letter of terM, I (one) and a place gives a setting or environment

25a    Statement’s invalid if David’s fat son and daughter abscond (9)
{AFFIDAVIT} – this written statement, confirmed by oath, is used as evidence in court – it’s an anagram (invalid) of IF DAVI(D’S) FAT after S(on) and D(aughter) have been removed (absconded)

26a    Mare maybe followed by a third horse, dead worried (6)
{NAGGED} – start with a horse, especially one that is old or in poor health, and add one third of a child’s word for a horse and D(ead) to get a verb meaning worried or pestered

28a    Offer formerly a few old pence (6)
{EXTEND} – a verb meaning to offer or grant is built from a prefix meaning former, a small number and the abbreviation for old pence

2d    Close company (4,2)
{WIND UP} – this is a not-very-cryptic definition of a phrasal verb meaning to close a company

5d    One needs to set one’s sights high when using it (4-8,3)
{ANTI-AIRCRAFT GUN} – a cryptic definition of a weapon used against hostile planes 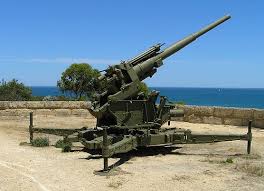 8d    Turn over map to find pad (4,5)
{FLIP CHART} – a charade of to turn over and a map gives a pad on which information can be displayed in sequence during a presentation

16d    Gloomy reply about first person in Rouen’s clothing (4,5)
{BLUE JEANS} – put a synonym for gloomy and an abbreviation for a reply around the French (in Rouen) first person singular clothing 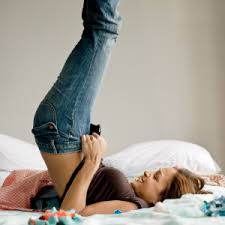 The now-traditional easy start to the Toughie week.

I nearly forgot to add that this is one of those cornery grids, but as it was so easy it didn’t matter this time!