We have a typical Giovanni today with an entertaining mixture of clues. Let us know what you thought of it in a comment.

10a  Short fellow taking companion to a dance (3-3)
{CHA-CHA} – drop the last letter (short) from a synonym for fellow then duplicate what you’ve got (taking companion) to make a ballroom dance of Latin American origin.

11a  Policy U-turn makes you go mad, then collapse (4-4)
{FLIP-FLOP} – a mainly North American term for a policy U-turn is a slang word meaning to go mad followed by a verb meaning to sit or lie down suddenly and heavily.

12a  A short campaign organised with many special effects? (14)
{PHANTASMAGORIC} – an anagram (organised) of A SHORT CAMPAIGN.

15a  Head of state falling short (4)
{MAIN} – an adjective meaning head or chief is the name of a US State without its final E (falling short).

17a  Document one reproduces — what’s needed? (5)
{TONER} – hidden in the clue is the powder needed in a photocopier or laser printer.

20a  What was demanded of Hardy maybe, an act presaging doom (3,4,2,5)
{THE KISS OF DEATH} – legend has it that this was demanded of Hardy by Lord Nelson on his deathbed (though his final words are reported as “Thank God, I have done my duty”). It’s also a phrase describing an action or event that is bound to lead to failure.

23a  Done fantastically by fellow, finished finally when asked for (2,6)
{ON DEMAND} – the definition here is when asked for. An anagram (fantastically) of DONE is followed by a fellow and the last letter (finally) of (finishe)D.

25a  A drip’s getting worse, becoming lots of quick-flowing water (6)
{RAPIDS} – an anagram (getting worse) of A DRIP’S. 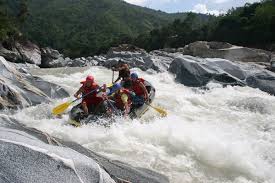 27a  Had a meal at back of pub, as is natural (6)
{INNATE} – an adjective meaning natural or instinctive is a verb meaning had a meal after (at back of) a pub.

28a  Guerrilla with remarkable claim relating to a type of warfare? (8)
{CHEMICAL} – the usual South American guerrilla is followed by an anagram (remarkable) of CLAIM to make a particularly nasty type of warfare.

1d  Entanglement that makes yours truly shut up (4)
{MESH} – how somebody might refer to himself or herself (yours truly) is followed by an injunction to keep quiet (shut up!) to make an entanglement.

2d  A trick? Be first to give a signal (6)
{BEACON} – A and a trick are preceded (first) by BE to make a signal such as was used in pre-twitter days to spread a warning of an invasion, for example.

4d  Shelter wide open with its roof off (6)
{AWNING} – take Y (the roof, top letter in a down clue) away from an adjective meaning wide open to leave a covering or shelter.

6d  Examination of various cells in a hospital? (5,5)
{BLOOD COUNT} – this cryptic definition doesn’t work terribly well for me. It’s a determination of the number of corpuscles that you have.

8d  Article stuffed into broken slate that may fill a gap? (7)
{SEALANT} – an indefinite article goes inside (stuffed into) an anagram (broken) of SLATE.

13d  Encouraging a number to join in judicial inquiry (10)
{HEARTENING} – a synonym for encouraging is formed by putting a two-digit number inside (to join in) a judicial proceeding.

16d  See denouncer of Tories be consumed by an envy out of control (3,5)
{NYE BEVAN} – put BE inside (consumed by) an anagram (out of control) of AN ENVY to get the most charismatic Labour politician (denouncer of Tories – “So far as I am concerned they are lower than vermin”) of the middle of the last century and the founder of the NHS in spite of much Tory opposition (here with an abbreviated version of his forename).

18d  Sports official about to get released with game finally covered (7)
{REFEREE} – this sports official (the target of much abuse from the likes of W Rooney) is constructed from a prefix meaning about followed by a synonym for released with the last letter (finally) of (gam)E inside (covered).

21d  This writer’s old as visualised (6)
{IMAGED} – a contraction of this writer is, in the words of the writer himself, is followed by a synonym for old.

24d  Daughter skating apparently — one to fall by chance? (4)
{DICE} – start with D(aughter) and picture her on top of (in a down clue) frozen water (skating apparently). This should lead you to a small cube used in a game of chance.

26d  The attraction of a match in which no one loses (4)
{DRAW} – double definition.

Out of many good clues the ones I liked best were 7a, 4d and 16d, but my favourite was 20a. Let us know what you liked in a comment.