A Game of Two Halves

I thought that the across clues today were pretty straightforward, but some of the down ones presented more of a problem. But all in all it’s a good puzzle with some excellent clues.
Let us know your views in a comment and please remember to cast your vote by clicking on one of the stars at the bottom.

1a  Press onwards, we hear tell, conserving energy (6,6)
{FOURTH ESTATE} – a humorous way of describing the press (coming after the Lords, Commons and clergy in the pecking order) is constructed from a sound-alike (we hear) of a word meaning onwards (as used in the expression “from that day onwards”) and a verb meaning to tell, containing (conserving) E(nergy).

9a  With flipping fabulous bird, gent is dancing outside (9)
{ESCORTING} – the definition is with. Reverse (flipping) a large mythical bird and around it put an anagram (dancing) of GENT IS.

10a  Put out about female getting sack (5)
{RIFLE} – a verb meaning to irritate or put out goes round F(emale).

11a  Almost tumble, holding case of rioja, finding corkscrew (6)
{SPIRAL} – put all but the final L of a tumble around (holding) the outer letters (case) of R(ioj)A.

12a  Cheapest places, always ancient, seen in theatre (8)
{STEERAGE} – put an archaic (ancient) or literary word meaning always inside a synonym for the theatre to get the cheapest places on a ship.

13a  Worn by practically everyone on beach (6)
{SANDAL} – this is a semi-all-in-one. Put a synonym for everyone without its final L (practically) after another word for beach.

14a  The empty message party leader’s included profane… (8)
{TEMPORAL} – an adjective meaning profane or secular comes from T(h)E (empty) followed by a lesson or message that can be learnt from an experience, with the first letter of P(arty) inside.

19a  Obscure star found in unknown new galaxy initially (6)
{UNSUNG} – a description of someone who is obscure or unacclaimed comes from the nearest star to Earth inside (found in) the initial letters of Unknown New Galaxy.

22a  Tick a right answer put in exercise (8)
{PARASITE} – insert A, R(ight), A(nswer) and a verb to put inside the abbreviation for physical exercise.

24a  Shock from Tarantino’s first artist, ‘Kill Bill’ star (6)
{TRAUMA} – the definition is shock. String together the first letter of Tarantino, the abbreviation for a successful artist and the forename of the star of his two-part film “Kill Bill”.

26a  Faithful former wife before decree (5)
{EXACT} – this word means faithful in the sense of accurate.

27a  Blimey, second harangue from bird (9)
{CORMORANT} – this is a long-necked bird (no, not Naomi Campbell!). It’s a charade of an interjection expressing surprise (blimey), a short time (second) and the sort of harangue that you might get from a 3d. 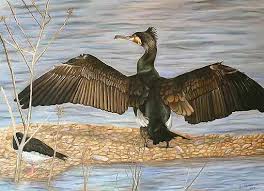 28a  Where one may get pins and needles? (12)
{HABERDASHERY} – a very gentle cryptic definition.

1d  Strips, laying bare blubber! (7)
{FLENSES} – we are meant to think here of someone taking off their clothes to reveal one or two excess pounds. It’s actually a verb (new to me) meaning slices the skin or fat from a carcass, especially that of a whale.

2d  Office lacking female fulsomeness (7)
{UNCTION} – the definition is fulsomeness (the sort of smarmy obsequiousness exhibited by Nicholas Witchell in his reports on the preparations for the Royal Wedding, for example). Remove the leading F(emale) from a duty or office.

3d  Call a shrew up, beginning to tame shrew (9)
{TERMAGANT} – start with a synonym for to call, add A and the reversal of another word for a shrew and finish with the first letter of T(ame). What you should end up with a harsh-tempered woman or shrew.

4d  Very angry revolting, Egypt’s principal character’s first (4)
{EVIL} – this was the last answer I got and I’m not sure that the clue works too well. The definition is very angry and this is one of the meanings given by Chambers (though I don’t know in what context it means that). To get the answer you have to start with a synonym for revolting and move its final E to the front. The clue tells us that the answer starts with E (first letter of Egypt) but not that it has to be transferred from the end. Furthermore, the surface doesn’t seem to make much sense.

5d  In concert, song evenly taken by lead (8)
{TOGETHER} – the definition is in concert. Put the even letters of sOnG inside (taken by) a lead or rope.

6d  Abrupt finish of Celt language (5)
{TERSE} – the last letter (finish) of (Cel)T is followed by a Gaelic language.

7d  Project wind by a very loud passage (6)
{AFFAIR} – this is a project or undertaking. Put a synonym for wind (the noun, not the verb) after A and the instruction that a musical passage is to be played very loudly.

8d  ‘Friends’ say something corny (6)
{CEREAL} – the answer is something corny that you may have for breakfast. It sounds like (say) what Friends was an example of. I’m presuming that the quotation marks around Friends are meant to signal that this is an example, otherwise “say” would be fulfilling two separate functions.

15d  Rising charge with record debts getting close (9)
{PENURIOUS} – the definition here is close or miserly. A verb meaning to charge or proceed quickly is followed by an old record format, then the whole lot is reversed (rising). Finally, we need to add the usual Crosswordland debts.

16d  Bit dim keeping right in charge (8)
{PARTICLE} – put a synonym for dim or faint around (keeping) abbreviations for right and in charge.

17d  One manages to grip end of potato peeler (6)
{COPPER} – someone who manages or gets by goes round (to grip) the first letter (end) of P(otato) to make another informal word for a peeler.

18d  Sailor on route to foreign parts (6)
{ABROAD} – a charade of an abbreviation for a sailor and a synonym for route produces foreign parts.

20d  ‘Shout’ perhaps polished off following pop star’s return (7)
{ULULATE} – this is a verb meaning to howl loudly or wail as an expression of grief (it’s not quite a shout, hence the ‘perhaps’, but we can forgive that for the excellent surface reading). Put a verb meaning polished off or devoured after the reversal (return) of the pop star who had a hit with ‘Shout’. Lovely clue!

23d  Shiatsu training incorporates religious aphorisms (5)
{SUTRA} – this is a set of aphorisms in Sanskrit literature and it’s hidden (incorporates) in the clue.

25d  This starts to get really irritating, dammit! (4)
{GRID} – the definition is this, i.e. what you’re looking at when you’re doing the puzzle. It’s the initial letters (starts) of the last four words.