MynoT’s last Toughie was all about the colour red so I was expecting a different colour this time because he likes to do series of themes. In fact today’s theme colour gives us a strong hint that he is making his way through the colours of the spectrum in the standard order (indigo should be interesting). I found this one quite a bit easier than his usual Toughies – let us know what you think in a comment. I’ve marked with an asterisk all the clues which I think are related to the theme – if I’ve missed any, let me know.

1a  Abusive harangue from girl at a race (8)
{DIATRIBE} – an abbreviated girl’s name is followed by A and a race or ethnic group to make an abusive harangue.

5a  Rascal’s one fish (6)
{SCAMPI} – * a rascal is followed by I (one) to make fish, the colour of which, when not served in breadcrumbs, matches today’s theme.

9a  Composer has a test for pear (8)
{BERGAMOT} – * start with the surname of an Austrian composer and add A and an annual check-up (test) to make a dessert pear. This is also a small citrus tree which bears a variety of 21d orange.

10a  Softly cat makes a swoop (6)
{POUNCE} – the musical instruction to play softly is followed by a wild cat.

13a  Habit of king to have light meal with no end of fuss (5)
{KNACK} – this is a habit or tendency. Start with one of the abbreviations for king and add a light meal from which (fus)S has been removed.

14a  Half the alphabet is something very small (4)
{ATOM} – this is the range of letters in the first half of the alphabet.

16a  One over-concerned with himself got entered in wrong site (7)
{EGOTIST} – insert (entered) GOT in an anagram (wrong) of SITE.

19a  It’s used for catching fish in bowler (7)
{SPINNER} – double definition, the bowler being a cricketer rather than a hat.

21a  Benefit of drink (4)
{SAKE} – another double definition – the drink is made from fermented rice.

24a  Old wise American (5)
{OSAGE} – * this is a Native American from a tribe living in Oklahoma. It’s O(ld) followed by a synonym for wise. When followed by the theme word this is an ornamental tree of the mulberry family which produces a fruit known as the hedge apple.

25a  Excessive neckwear for such ages? (9)
{SEVENTIES} – I’m not sure why having one of these items of neckwear for each day of the week (5,4) should be seen as excessive for men in this age range. Alternatively, and more likely, the clue is a cryptic definition of the decade during which excessively wide ones of the kipper variety were seen a lot. This clue doesn’t really work for me.

27a  Accountant spies tree (6)
{ACACIA} – this tree is a charade of an abbreviation for an accountant and the usual US espionage organisation.

29a  One could live in this empty township, we hear (6)
{TEEPEE} – something that a Native American could live in sounds like (we hear) township with all the inner letters removed (empty).

30a  Recklessly determined he will get 13 (4-4)
{HELL-BENT} – an adjective meaning determined to the point of recklessness is made from a contracted form of he will followed by a synonym for 13a.

1d  Seabed could become lower (6)
{DEBASE} – an anagram (could become) of SEABED.

2d  Take gold initially to the French then a goddess (6)
{AURORA} – * the name of the Roman goddess of dawn is constructed from the single-letter abbreviation for take (as seen in prescriptions) and the heraldic term for gold, these being preceded by (initially) “to the” in French and followed by (then) A. The answer follows the theme word to make a paint colour.

6d  See Labour — regularly — like this (9)
{CLOCKWORK} – * a charade of an informal verb to see and a synonym for labour gives a word which when preceded by “like” means regularly. For the theme think of the Stanley Kubrick film. 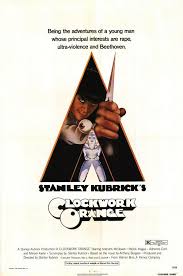 8d  Kill Ray for his sporting equipment? (3,5)
{ICE SKATE} – a (US criminal slang) verb to kill is followed by a large edible type of ray.

11d  Tool of aged in Algeria? On the contrary (4)
{ADZE} – on the contrary means that the IVR code for Algeria goes inside an abbreviation for the genitive form of the latin noun aetas, meaning lifetime or age. The result is a cutting tool similar to an axe.

15d  Moroccan dynasty with monarch in Spain (9)
{TANGERINE} – * the definition is an inhabitant of a city in Morocco. Splice together a Chinese dynasty and the initials of our Queen, then add IN and the IVR code for Spain.

18d  Fruit important artist sent to Germany and Spain (8)
{BIGARADE} – * this is a bitter Seville orange. Start with an adjective meaning grand or important, add the abbreviation for an Associate of the Royal Academy (artist) and finish with the IVR codes for Germany and Spain.

23d  Possibly haunts extremely French island (6)
{USHANT} – an anagram (possibly) of HAUNTS gives us the name of an island off the coast of Brittany. It’s extremely presumably because it’s the westernmost bit of metropolitan France.

My favourite clues today were 1d, 6d and 20d. Let us know what you liked in a comment.