The quality of mercy!

As has been commented elsewhere, as Toughies go this one was a bit too easy. Nonetheless, it was enjoyable.

1a    Activity improving the mouth, long hair and eye, possibly (4,7)
{ORAL HYGIENE} – the maintenance of healthy teeth and gums is an anagram (possibly) of LONG HAIR and EYE

9a    I spot one about to swallow iodine — that’s foolish (7)
{IDIOTIC} – put I, a small spot (3), another I (one) and a one-letter abbreviation for about around the chemical symbol for Iodine to get a word meaning foolish 12a    Drink line, one line not fully supplied by vintner, ultimately (7)
{LIQUEUR} – an alcoholic drink is a charade of L(ine), I (one), most of a line of people and the final letter (ultimately) of vintneR 14a    Drug source includes phosphorus (5)
{SPEED} – this illegal amphetamine is created by putting source, beginning or germ around the chemical symbol for phosphorus

15a    Satisfied a sailor is twisting bones (9)
{METATARSI} – a charade of a word meaning satisfied (3), A, a sailor (3) and IS reversed (twisting) to get these bones found in the foot

20a    Drink in cold bar initially providing limited comfort? (5)
{CRUMB} – put this alcoholic drink inside the initial letters of Cold and Bar to get this limited comfort

25a    Item almost allowed after bold move (6)
{COUPLE} – this pair of people are often described as an item – put most of a word meaning allowed after a bold move, against a despotic leader perhaps

27a    Advance with titled lady, then stop, see (2,3,6)
{LO AND BEHOLD} – a charade of an advance of money (perhaps to 26 across!), an abbreviation of an award made to a lady and a word meaning to stop gives a phrase meaning “see!”

2d           After the accident, finally studied the tyre (7)
{RETREAD} – the final letters of the first three words are followed by a word meaning to study, particularly at university, to give a cheap tyre – I haven’t purchased one of these since one disintegrated while I was doing 70mph on the M40 many years ago.

3d           In tears all March, upset about end of February (9)
{LACHRYMAL} – an adjective meaning in tears is an anagram (upset) of all March around Y, the end of FebruarY

7d           Journalistic period that (paradoxically) could be so sane (5,6)
{SILLY SEASON} – the time of year when journalists have nothing sensible to write about (which doesn’t usually stop them from writing about something!) could be a clue for an anagram of SO SANE 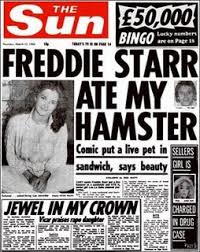 8d           Sports handicap system: book is rather overlooking it (6)
{BISQUE} – a term in some sports for the handicap whereby a player allows a weaker opponent (at the latter’s choice of time) to score a point in a set, deduct a stroke at a hole, take an extra turn in croquet, etc. is built up from B(ook), IS and a word meaning rather from which IT is dropped (overlooking it)

11d         Criticise revered figure about subject of humour? It’s how the distressed can respond (5,6)
{PANIC BUTTON} – start with a three-letter word meaning to criticise and follow it with a  revered figure placed around the subject of a joke to get a method by which the distressed can summon help – I tried attack as the second word but although it seems to fit the definition better than the actual answer it does not fit the wordplay!

18d         Gangster family turning up: Italy soon almost devastated (7)
{MAFIOSO} – this gangster of Italian descent is created by reversing the abbreviation of FAM(ily) and following it with an anagram (devastated) of I(taly) SOO(n)

Nothing stood out for me – but it was an enjoyable diversion.