We have a nice mixture of clues from Giovanni today. Let us know what you thought of it in a comment.
To reveal an answer, should my hint be inadequate, drag your cursor through the space between the curly brackets under the clue.

8a  Soft soap that gets wet in the bathroom (7)
{FLANNEL} – double definition, the first (soft soap) meaning flattery.

10a  Country lake west of peninsula (7)
{LIBERIA} – west of in an across clue means to the left of, so this country is L(ake) before a European peninsula.

12a  Energy of second eleven maybe (5)
{STEAM} – this type of energy is S(econd) followed by what eleven people may constitute in some sports.

14a  Goes along casually, using various bits from tool set (7)
{TOOTLES} – an anagram (various bits) of TOOL SET produces a lovely informal verb meaning travels in a leisurely way without rush or hassle.

19a  Snake here more than half coiling around (7)
{SERPENT} – . Thanks to Giovanni for providing the correct wordplay – the snake is made by taking a word meaning here and reversing (coiling around) just the first four letters (more than half).

24a  Machine in box office covered in rubbish (5)
{ROBOT} – put a synonym for rubbish around B(ox) O(ffice).

26a  Note mum, so frightfully important (9)
{MOMENTOUS} – an anagram (frightfully) of NOTE MUM SO.

27a  Insult a female needing self-confidence (7)
{AFFRONT} – the definition is insult and it’s a charade of A, F(emale) and a synonym for self-confidence.

28a  A short time in that place where the war action is? (7)
{THEATRE} – a word describing the area where a war takes place is an adverb meaning in that place with A and T(ime) (short time) inside it.

2d  Odd person needing employment — social services know about it (8)
{CASEWORK} – an informal word for an odd person is followed by a synonym for employment to make social work concerned with the study of people’s family history and personal circumstances.

3d  GB pal? Oh no, ill-disposed to English! (10)
{ANGLOPHOBE} – an all-in-one leading to someone who dislikes the English is an anagram (ill-disposed) of GB PAL OH NO followed by E(nglish).

4d  Here’s piano — play something we’ve heard many times before! (9)
{PLATITUDE} – start with P(iano) and add a word meaning scope or freedom of movement (play, in a car’s steering for example) to make a truism that is heard too often.

6d  Author is yellow, then in good health (6)
{ORWELL} – a charade of an heraldic term for yellow and an adjective meaning in good health forms the surname adopted by the author Eric Blair.

7d  Brought into market there’s some strange monkey (8)
{MARMOSET} –  an anagram (strange) of SOME is brought into a synonym of market to make a small monkey with a silky coat and long tail.

9d  Animal’s left leg, one getting trapped (4)
{LION} – this animal is made from L(eft) and the leg side of the wicket in cricket with I (one) trapped inside.

15d  Definitely not tight-fisted (4-6)
{OPEN-HANDED} – a neat cryptic definition of being generous.

16d  Oversupply a friend with salt in food? (9)
{GLUTAMATE} – a charade of too much of something (oversupply), A and a friend produces a salt, which is also a shorthand way of describing a common flavour enhancer in food.

17d  European in a train wandering around America (8)
{AUSTRIAN} – this European is an anagram (wandering) of A TRAIN around US.

18d  Like some food in the course of journey that’s kept cold (2,6)
{EN CROUTE} – a way of cooking food (Beef Wellington, for example) is an expression meaning in the course of a journey with C(old) inside (kept). 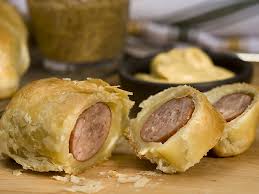 20d  Snub an expert on how religion should be taught? (6)
{REBUFF} – put an expert or enthusiast after the abbreviation for religious education to make a snub. I presume that the question mark and the “should be” are there to point up the fact that religious “education” is often more like indoctrination.

22d  Discover former lover in seaside county (6)
{SUSSEX} – an historic English county by the sea (split into two parts administratively) is an informal verb meaning to realise or discover followed by the shorthand way of describing a previous partner.

23d  Filthy stuff that gets stomachs churning over (4)
{SMUT} – reverse (churning over) a childish word for stomachs.

25d  You no longer will sit in magnificent house (4)
{THOU} – hidden (sit) in the clue is a word for you which is no longer in common use.