Surely no-one will complain that this puzzle by Mr or Mrs X is too difficult! I thought that it was pretty easy but quite pleasant. If it leaves you wanting more, then why not have a go at today’s Toughie, which is well within the scope of most solvers?
If you need to see an answer just drag your cursor through the space between the brackets under the relevant clue.

7a  Takes in top paper (8)
{FOOLSCAP} – this is a size of paper and it’s a charade of a verb meaning deceives or takes in and a protective cover (top).

9a  A farmer finally fit, fit for ploughing (6)
{ARABLE} – string together A, the final letter of farmeR and a synonym for fit.

11a  Champing at the bit, gunners round republic (6,2,2)
{RARING TO GO} – this is a charade of the abbreviation for the Royal Artillery (gunners), a synonym for round and a republic in West Africa.

12a  Civilised ancient city’s destruction (6)
{URBANE} – join together the name of a Biblical city on the Euphrates and a noun meaning misery or destruction to form an adjective meaning civilised or refined.

14a  Requiring careful handling, domestic pet in food store close to garage (8)
{DELICATE} – put a domestic pet between a shop that sells fine food and the last letter (close) of garagE.

15a  Antagonism shown by heartless adversary carrying it (6)
{ENMITY} – an adversary without his middle letter (heartless) contains (carrying) IT. I’m not keen on this clue – the words used for antagonism and adversary are from the same root.

17a  Showing little interest, stable about foremost of thoroughbreds (6)
{STOLID} – an adjective used to describe someone who shows little emotion or animation is a synonym of firm or stable round (about) the first letter (foremost) of Thoroughbreds.

20a  Distressed Hellenic fabric (8)
{CHENILLE} – this fabric, an anagram (distressed) of HELLENIC, is described by Chambers as “a thick, velvety cord or yarn of silk or wool resembling a woolly caterpillar”.

22a  Extremely tough breed in ancient land (6)
{THRACE} – start with the outer letters (extremely) of TougH and add a synonym for breed or strain to form an ancient country which is now divided between Turkey, Bulgaria and Greece. 23a  Crowd sitting for impromptu jazz concert (3,7)
{JAM SESSION} – this is a charade of a verb meaning to crowd or pack tightly into a limited space and a synonym for a sitting.

26a  Settler, one wearing strange garment (8)
{EMIGRANT} –  I (one) has around it (wearing) an anagram (strange) of GARMENT.

1d  Study poetry, then discuss (8)
{CONVERSE} – a charade of a verb to study and another word for poetry. “Then” is just padding.

3d  Rare shock Conservative getting in (6)
{SCARCE} – an adjective meaning rare is a shock or fright with C(onservative) inserted.

4d  Glove relative left in pocket (8)
{GAUNTLET} – a relative and L(eft) go inside a verb meaning to obtain (pocket).

5d  Special item (10)
{PARTICULAR} – double definition, the same word used firstly as an adjective and secondly as a noun.

6d  Plant disease in most of Britain (6)
{BLIGHT} – a slang term for Britain used by soldiers in the World Wars (to cop one of these was to get a wound sufficiently serious to be shipped home) has its final Y dropped (most of) to leave a plant disease.

13d  Regulate trade abroad importing cars (10)
{ADMINISTER} – an anagram (abroad) of TRADE goes round (importing) the quintessential British cars of the 1960s (now made by BMW).

16d  Charm wild animals after spot of training (8)
{TALISMAN} – this lucky charm is an anagram (wild) of ANIMALS which comes after the first letter (spot) of Training.

18d  Avoid fish and fowl (8)
{DUCKLING} – string together a verb meaning to avoid and one of Crosswordland’s favourite fish to make a young bird (fowl). 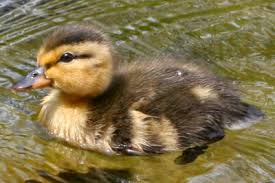 19d  Having little energy in very pleasant Italian city (6)
{VENICE} – put E (a little Energy) between V(ery) and a synonym for pleasant.

21d  Home in centre? Middle of nowhere! (6)
{HEARTH} – we want a word meaning fireside which is used as a metaphor for home. Start with a synonym for centre and add the middle letter of nowhere.

24d  Poet’s unfinished copy (4)
{BURN} – drop the final letter (unfinished) from Scotland’s national poet to leave a verb meaning to produce a copy of a CD or DVD.