Ray T’s second outing as a Toughie setter was quite enjoyable. Once you get used to the stretched definitions, the clues are straightforward if a bit tough.

7a    Spitfire say, producing trail following turn (8)
{WARPLANE} – a Spitfire. or a Hurricane, is constructed by putting a country trail after a turn or twist 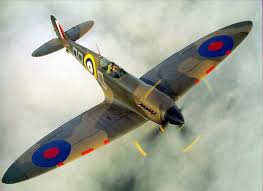 11a    Giving a hand around the house? (10)
{APPLAUDING} – clapping hands in the auditorium

12a    Sport includes each player’s opening stand (6)
{TEAPOY} – a word meaning to sport is placed around EA(ch) and P (Player’s opening) to get a small three-legged table or stand, especially one that holds a caddy. 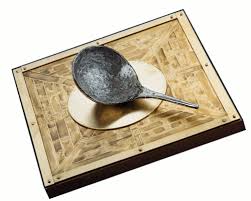 15a    Trails from snails’ ends reduced inside (6)
{SPOORS} – these trails are created by starting with SS (SnailS’ ends) with reduced, as in reduced quality, inside

17a    Gold and oil supplier for Blair, originally (6)
{ORWELL} – combine the heraldic term for gold with an oil producer to get the pen name of Eric Arthur Blair, author of Animal Farm and Nineteen Eighty-Four

23a    Feller left Brown with nothing! (10)
{LUMBERJACK} – this feller of trees is a charade of L(eft), a shade of brown and a word meaning nothing at all

25a    Created by Dior, dainty frock (6)
{ORDAIN} – hidden inside (created by – I’m not sure about that as a hidden indicator) the clue is a verb meaning to frock or invest with priestly office

26a    Medicine can treat start of typhoid internally (8)
{TINCTURE} – in this semi-all-in-one clue, a medicine is built up from a can followed by a verb meaning to treat around T (start of typhoid)

1d    Organ on endless groove (8)
{PANCREAS} – an organ of the body is a charade of a the Greek god of pastures, flocks, and woods (pipe player) and a groove without its final letter (endless)

3d    In the morning, rising with ‘female complaint’ (6)
{MALADY} – the abbreviation for morning is reversed (rising) and is followed by a female with refined manners and instincts to get a complaint

5d    Shot one steer on trail (10)
{IRIDESCENT} – this one gave me more trouble than most – an adjective meaning shot or rainbow-coloured, as in shot silk, is a charade of I(one), to steer and a trail ;left by an animal – stretching the meanings of the definition and some of the wordplay made this more difficult

6d    Girl one’s turned over to get brown (6)
{SIENNA} – take a girl’s name and I’S (one’s) and reverse all to get a fine pigment made from ferruginous ochreous earth, originally browny-yellow but warm reddish-brown when roasted

13d    Notorious document Blair modified (10)
{PROVERBIAL} – a valid synonym for notorious, but not one that came readily to mind, is built from a verb meaning to document and an anagram (modified} of BLAIR

21d    Gallery not opening holding Braque’s final work (6)
{OEUVRE} – knowing that Ray T lives in Paris is a help in finding the gallery – it’s the one that houses the Mona Lisa – lose its first letter (not opening) and then insert E (BraquE‘s final) to get an artist’s work – does anyone know Braque’s final work and where it is housed?

22d    Rotten boxed by punk in Damned (6)
{UNKIND} – a word meaning rotten or callous is hidden inside (boxed by) the rest of the clue – allusions here to Johnny Rotten, the Sex Pistols (who considered calling themselves The Damned) and The Damned (who did)

Ray T’s transition into a Toughie setter has allowed him to push the boundaries of his definitions even more than in his daily puzzles.