Toughie No 439 by Cephas

An easy puzzle today – many have already said easier than today’s regular cryptic.

5a    Rotten place, one getting in the way (6)
{PUTRID} – a word meaning rotten is built up from a verb meaning to place followed by I (one) inside an abbreviated way

8a    Three notes, one repeated before one has to rub out (6)
{EFFACE} – three notes of the diatonic scale of C major are followed by a playing card with a single spot on it to get a word meaning to rub out or remove

13a    Add a couple of pages with piece left over (6)
{APPEND} – a word meaning to add is a charade of A, P(age) repeated and the piece that’s left over

15a    One imagining diamonds dropped tool (6)
{REAMER} – take someone who is imagining and drop the D(iamonds) from the front to get a tool for enlarging, shaping or finishing a bore 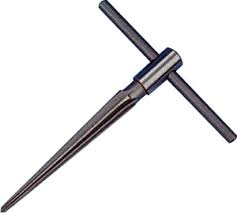 21a    Thousand joining, most dark and most twisted (8)
{KINKIEST} – combine the letter used to indicate a thousand in the metric system with a word meaning most dark to get the most twisted or perverted

23a    Leaving New Zealand horizontal, excitable libertine (8)
{LOTHARIO} – an anagram (excitable) of HORI(Z)O(N)TAL without the letters of N(ew) Z(ealand) gives a libertine – I’m never happy about removing disconnected letters from the anagram fodder without due indication

3d    I name old work that’s rough (7)
{INEXACT} – a charade of I, N(ame), old, as in old flame, and a word meaning work, as in the tablets will work soon, gives an adjective meaning rough or approximate

7d    Cannibalistic competition? (3-3-3)
{DOG-EAT-DOG} – a ruthless pursuit of one’s own interests could be a domestic pet devouring one of its own kind – according to Chambers the words are hyphenated for the adjective but not the noun

16d    One still without polarity (7)
{ASTATIC} – combine A (one) with a synonym of still to get an adjective meaning without polarity, as a pair of magnetic needles set in opposite directions

17d    Pitched battle arbitrator? (7)
{REFEREE} – a cryptic definition of the arbitrator of a football match 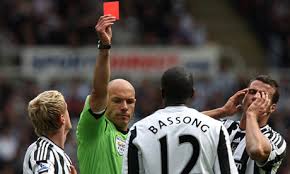 A fairly easy one from Cephas today – I bet he wished he’d had three like this in the Times Championship on Sunday!