We have an entertaining puzzle from Shamus today (but no Nina, as far as I can tell!). Let us know your thoughts in a comment!
As always, the answers are hidden inside the curly brackets under the clues. Highlight the space between the brackets to reveal them.

1a  Unscrupulous live bet? Tell who is corrupt (5,3,4)
{BELOW THE BELT} – a phrase, derived from boxing, meaning unscrupulous or outside the bounds of what is fair is constructed from BE (live) followed by an anagram (is corrupt) of BET TELL WHO.

8a  In which Romans mobilised say among amphitheatre performers? (7)
{LEGIONS} – the major divisions into which the Roman army was organised are made by putting EG (say, for example) inside performers in the circuses of Rome. I couldn’t decide whether the word for these performers is meant to be taken literally (and these beasts certainly took part in the Roman circuses) or is a metaphor for the brave men, such as gladiators, who fought there.

9a  Severely punish leaders of teenage rowdies with measure (7)
{TROUNCE} – a verb meaning to punish severely comes from the initial letters (leaders) of Teenage Rowdies followed by a unit of weight equal to 1/16 of a pound.

11a  Wrongly put dear deal in dearer terms (5,2)
{TRADE UP} – an anagram (wrongly) of PUT DEAR gives us a phrasal verb meaning to exchange what you currently have for something more expensive.

12a  One taken as security from house and theatre (7)
{HOSTAGE} – someone who is held captive as security for the fulfilment of a condition is constructed from an abbreviation of house followed by a metaphor for the theatre.

13a  Soldiers returning in watch largely not a friendly force (5)
{ENEMY} – reverse (returning) ordinary soldiers and put them inside a verb meaning to watch which has lost its final E (largely).

14a  Obligatory holder of post (9)
{INCUMBENT} – double definition, the second used for the current holder of an office (often ecclesiastical).

16a  Board arrive around college with note (9)
{COMMITTEE} – a group of people who meet regularly to carry out some allotted business (board) is formed from a verb meaning to arrive which surrounds a famous New England technology college and a note from tonic sol-fa.

19a  Short walk around a golf tournament (3-2)
{PRO-AM} – put a short walk, often along the shoreline, around A to get a golf tournament, usually held to raise money for charity, in which full-time players are partnered with part-timers (often celebrities).

21a  Good road almost in close country (7)
{ENGLAND} – to get the name of this country put G(ood) and a synonym for road without its final E (almost) inside a verb meaning to close or finish.

23a  Dissimilar woman with dig (7)
{UNALIKE} – a charade is made by putting a woman’s name (and a charade is very appropriate if you’re thinking of the same person that I am) ahead of a verb for which dig is a slang alternative.

24a  Poor international, no good as import (7)
{MEANING} – the definition is import or significance. Start with an adjective meaning poor or inferior and add I(international) and the abbreviation for No Good.

25a  Quiet period among books before start of easier work (7)
{OPERATE} – a verb meaning to work or function is made by putting P (piano, quiet) and a synonym for period inside the abbreviation for the books which form the first part of the Bible, then finishing with the first letter (start) of Easier.

26a  Nancy’s indefinable quality? (2,2,4,4)
{JE NE SAIS QUOI} – the appearance of Nancy (like Nice) at the start of a clue so that it starts with a capital letter should make you suspect a French connection. What we want here is a French phrase indicating that the speaker can’t quite pin down some elusive quality.

2d  See female writer first in a rough sense (7)
{LOOSELY} – the definition is in a rough sense. When you’ve got the answer it’s easy to fall into the trap of thinking that the first two letters are “see”. Actually, see is being used in the ecclesiastical sense, so we want a Cambridgeshire diocese and before that (first) put the surname of the female author of “Gentlemen Prefer Blondes”.

3d  Feeble reason to restrict southern school for campaigners? (4,5)
{WEST POINT} – I love this clue. School for campaigners is the US military academy where army officers are trained. To get its name start with a term for feeble (as used by Mrs Thatcher), add a synonym for reason or relevance and put S(outhern) inside (restricted).

4d  Old director’s problem (5)
{HITCH} – double definition, the first being the familiar nickname for the film director who was the master of suspense.

5d  Employer acquiring liberal award in flourish (7)
{BLOSSOM} – a verb meaning to flourish is made from an informal noun for employer with L(iberal) inside (acquiring), followed by an award which is in the personal gift of the sovereign and which is limited to 24 living recipients at any one time.

6d  Story about horse carrying European ancestry (7)
{LINEAGE} – the definition is ancestry. Place a story or untruth around (about) an informal word for a horse and inside that (carrying) put E(uropean).

7d  Fool sadly created bit of mess making delicacy (7,5)
{CLOTTED CREAM} – we want a dairy product (delicacy) which is a speciality of the area where I live. Start with a fool, add an anagram (sadly) of CREATED and finish with the first letter (bit) of M(ess). 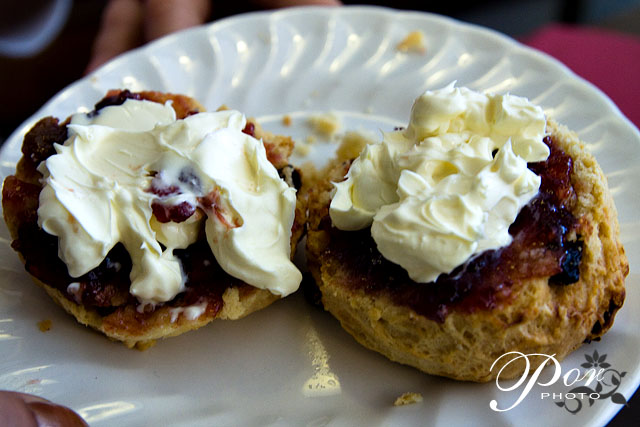 10d  Activity supported by English politician before day is calm (4-8)
{EVEN-TEMPERED} – to get an adjective meaning calm or not easily annoyed start with an activity or competition and add (supported by, in a down clue) E(nglish), the usual abbreviation for a politician, a poetic word meaning before and D(ay).

15d  Unsuspecting child initially rues loud eccentric (9)
{CREDULOUS} – an adjective meaning prepared to believe anything (unsuspecting) starts with the first letter (initially) of C(hild) which is followed by an anagram (eccentric) of RUES LOUD.

17d  Tycoon having a grand name in China (7)
{MAGNATE} – in Cockney rhyming slang a pal is a china (short for China plate). Inside this put A G(rand) N(ame) to make a tycoon.

18d  Picture statement by opponent of Ecstasy? (7)
{IMAGINE} – the definition is picture (form a mental image of) as a verb. The question mark should alert you to the fact that the word is constructed in a slightly unorthodox way – it’s how an opponent of E(cstasy) might express his opposition to it, using a dialect form of against.

19d  Some elevated land no longer found in French city (7)
{PLATEAU} – a description of someone who is no longer with us is found in a French city on the edge of the Pyrenees which is regularly on the route of the Tour de France.

20d  A master in beginning curtailed Eastern pastime (7)
{ORIGAMI} – put A and M(aster) inside a synonym for beginning or source which loses its final N (curtailed) to get an Eastern (specifically Japanese) pastime.

22d  Follow scholar’s teaching (5)
{DOGMA} – we finish with a final charade of a verb to follow closely and a Master of Arts (scholar).

The clues which I particularly liked today included 26a, 2d, 7d and 18d, but my clue of the day is 3d. Tell us what you thought in a comment!